219th GA: Visit Vicki in the Voices Venue: Button, Button, Whose Got the Button 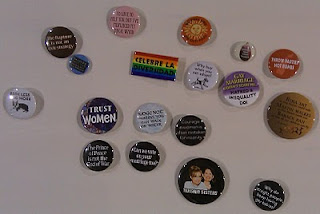 Vicki's first Presbyterian General Assembly (GA) was 1983 when she was a Youth Advisory Delegate (YAD) to the United Presbyterian Church United States of America (UPCUSA) GA in Atlanta. She first volunteered in the Exhibit Hall Booth of the Witherspoon Society back when Gail Knox was the booth Coordinator. She can’t remember when she inherited the Booth Coordinator mantle, but she has been wearing it awhile now.
This is the first year Vicki has coordinated the Presbyterian Voices for Justice (PVJ) Booth because this is the first GA that PVJ has been in existence. PV4J was formed in 2009 by a union of The Witherspoon Society and Voices of Sophia. In the past, Vicki has been a member of both previous groups, so she is a good person to coordinate the PVJ Booth.


Continuing a tradition begun by Gail Knox, Vicki selects liberal, progressive and otherwise subversive buttons to sell, this year for one dollar each. At times a crowd of button shoppers can gather at the booth as they each look for the perfect button to express their left wing politics and/or heterodox theology. And this year, to help introduce PVJ, Vicki has also selected wild and crazy postcards, bumper stickers, and bookmarks, also for sale at one dollar each.
Vicki started working mid Thursday afternoon and into the early evening to set up the booth and continued working Friday morning to prepare it for the opening of the exhibit hall at noon.
In addition to buttons, postcards, bumper stickers and bookmarks, the PVJ Booth, #303 in the GA Exhibit Hall, also offers free throat soothers so that progressive Presbyterians can maintain their voice for justice while at the General Assembly.
Posted by John Edward Harris at 4:37 PM