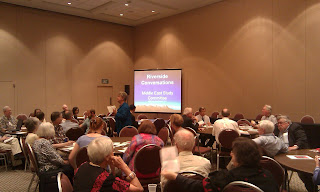 There were several Riverside Conversations: Pre-assembly workshops for Commissioners and Advisory Delegates, to choose from. I chose to sit in on the second of two conversations about the Middle East Study Committee Report.

The Conversation began at 10: 30 AM when the Reverend Susan Andrews, a member of the nine member Middle East Study Committee, opened the conversation with a reading from scripture and a prayer. Soon after participants were welcomed, Victor Makari, Ph.D., coordinator for the Middle East Office of the GAMC, offered a background of the 200 year history of witness, support and presence in the Middle East.

After Victor’s fifteen minute background presentation, Susan Andrews narrated power point presentation (photo right) designed to summarize the Committee’s Report, which in her words is “172 pages of dense narrative” and which seeks to speak the truth in love. After the half-hour Power Point presentation the Reverend Brian Ellison, Chair of the Mission Responsibility Through Investment (MRTI) Committee, spoke for about ten minutes about the work of MRTI, especially as it relates to the Middle East, and more particularly MRTI’s conversations with the Caterpillar Corporation.

With about thirty minutes left in the Conversation, Middle East Study Committee members in attendance, Lucy Janjigian, Nahida Gordon, and Byron Shafer, along with Brian Ellison, were invited forward to answer questions from participants, Andrews directing that only Commissioners and Advisory Delegates should be asking questions.

The Reverend Byron Shaeffer, the only Committee member who declined to sign the report, was asked why he decided not to sign off. He replied that he was not convinced that the report reaffirms the right of Israel to exist and that he thinks the report needs to include a third narrative which includes identification of what is wrong with both the Israeli narrative and the Palestinian narrative.

Committee member Nahida Gordon, A Presbyterian born in Palestine, shared her concern over the use of the word “rights”. She noted that asking Palestinians to say that Israel has the “right” to exist is like asking Indigenous Americans to say that Europeans had a “right” to colonize the North American continent.

About two hundred people were in attendance, half sitting around tables in the front and half sitting in rows of chairs at the back of the room. Considering this was the second of two scheduled conversations, approximately four hundred Commissioners and others were able to hear from the Committee and peruse free copies of the report before the GA even officially convened. Given the attendance, this report, coming before Committee 14, promises to generate considerable debate and focused consideration.
Posted by John Edward Harris at 2:08 PM