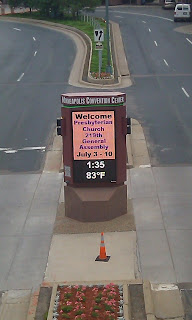 Cynthia Bolbach was elected Moderator of the 219th General Assembly on the fourth ballot when she garnered 51% of the vote (not the 53% as reported by the PNS), accumulating 315 of 635 votes. If the election of the moderator can at all predict the mood or theological leanings of an Assembly, what road it will follow, and whether it might turn left or right, then the election of Bolbach, generally perceived to be progressive, could have been seen as a hopeful sign for progressives and the passage of an Amendment to change G-6.0106b.

Add to Bolbach’s fourth ballot margin the votes cast for the other two candidates generally perceived to be progressive, Maggie Lauterer (49 votes or 8%) and Eric Nielsen (37 votes or 6%), and one could argue that the 219th GA was comprised of 65% (411 out of 635 votes) progressives and 35% (224 out of 635) conservatives, perhaps a sure sign that an amendment to G-6.0106b would be sent to the presbyteries. But not all commissioners voted during the election for moderator. Only 635 votes out of a maximum total of 712 votes were cast and about 80 commissioner seats were empty during the election of the moderator.

More commissioners voted in favor of amending G-6.0106b, 373 out of 700 voting, or 53%, than voted for Bolbach, but fewer than voted for all three progressive candidates combined. There were 65 more commissioners counted as voting on the amend G-6.0106b vote than were counted on the fourth moderator vote, but the vote was still 12 short of the maximum total.

Once I have accumulated the data I am looking for, I will offer further analysis of the G-6.0106b vote and its chance of passage in the presbyteries, so stay tuned.
Posted by John Edward Harris at 10:33 PM