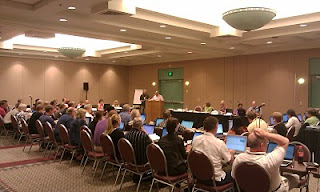 During Monday afternoon’s session the Committee dealt with several issues and generally adopted what came before it with little if any amendment, although there were several attempts to amend. To this observer it seemed that committee members are being given the opportunity to have their say but that generally the majority of Committee members were unswayed by counter arguments.

The evening’s session (photo right) began with prayer, followed by John Huffman, a member of the Middle East Study Committee, talking about his own personal journey and urging the Assembly Committee on Middle East Peacemaking Issues to approve the Study Committee’s report “Breaking Down the Walls”. Huffman was followed by several Overture Advocates speaking to particular overtures. After an evening of sitting and listening, the Committee 14 adjourned for the evening, closing with worship, at around 8:50 PM

As I have observed this committee, its debate and the presentations and testimony given to it, it has become apparent that the issues the Assembly committee is dealing with it cut across the usual liberal and conservative divide. I have witnessed those usually identified as Liberal and those usually identified as Conservative argue the same positions as other conservatives and liberals have argued the opposite position.
Posted by John Edward Harris at 2:06 AM