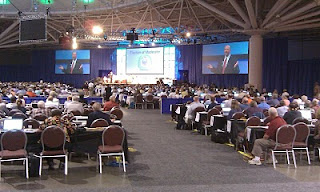 Nominating speeches were made. Those nominated addressed the Assembly. Ninety minutes were then offered to Commissioners to ask questions, each candidate answering in turn.
Minister Commissioner Kim Travis Adams of Northeast Georgia Presbytery asked the first question, one relating to the historic Presbyterian emphasis on an educated Ministry, including Church Educators and Commissioned Lay Pastors. The first to answer was the Reverend Julia Leeth, followed in turn by the Reverend Jin S. Kim, the Reverend James A. Belle, Elder Cynthia Bolbach, the Reverend Eric G. Nielson (photo right), and finally the Reverend Maggie Lauterer. The second question related to the relationship among and use of the Bible, the Book of Confessions, and the Book of Order. The third question, asked by a Theological School Advisory Delegate (TSAD), asked the candidates to share what would be at stake if they were not elected Moderator. A fourth question related to the Great Commandment (mission) and the Great Commission (evangelism) and how the candidate would relate them and to them. A fifth question asked candidates to share how they felt about youth involvement in both local church life as well as church events such as General Assembly. The sixth and final question, asked by a Youth Advisory Delegate (YAD), focused on Civil Unions and Christian Marriage.

After the first ballot it was apparent that Cindy Bolbach was pulling the most votes, but not a clear majority. When it became apparent that as many as 200 votes were not being counted several minutes were devoted to testing and refining the electronic voting process. Finally, after a few more test votes and actual Votes, and on what I believe to have been the fourth ballot (as I predicted, but it was hard to keep track due to the problem with the electronic voting machines), Cindy Bolbach was declared the Moderator.

While Bolbach was the evening’s winner, the loser was the electronic voting machines and process. I found myself longing for the earlier days of voting by colored paddles, waved in the air. As the voting machines were being tested, some of us observing in the peanut gallery had visions of hanging chads and Bush vs. Gore. It wasn’t pretty and Commissioners seemed to be growing more frustrated with each test vote that still seemed not to be counting all the votes.

I was planning to report the vote tally for each ballot but the numbers flashed on and off the video screens so fast I could not right them down and the former moderator failed to announce all the numbers for the second as well as the final ballot.
Posted by John Edward Harris at 1:00 AM