219th GA: Dancing the Night away at the Witherspoon Society Dance 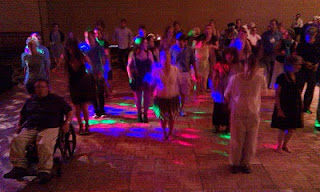 I am biased, but I think the Witherspoon Society dance is, without a doubt, the most fun event at the General Assembly. This GA’s dance was held last Tuesday from 9:00 PM to 1:00 AM Wednesday in the Hyatt’s Nicollet Ballroom. By the time I arrived, around 10:00 PM, the room was already buzzing with several people on the dance floor.

This year’s DJ was one of the better ones over the past few years, playing three to four songs from the same genre, such a rock, before switching to another genre, such as hip-hop. As usual these days, the DJ not only played dance tunes but provided a light show which illuminated the dance floor with various lighting effects, adding to the celebrative mood (photo right).

With a cash bar that offered soft drinks as well as beer and wine, and perhaps mixed drinks (but I really don’t know), there were many opportunities for liquid refreshment at the dance. Our beveridge of choice for the evening was red wine. Those of legal drinking age had their hand or other body parts stamped so the bar tenders could identify them and those under legal drinking age were required to sign a covenant, stating that they would not drink alcohol. Free munchies, including pretzels and dip, nuts, potato chips and popcorn were also available and widely consumed.

The room exploded into applause when General Assembly Moderator Cynthia Bolbach entered the venue. Even though I got down on my knees and pleaded with her to give me the honor of the first Moderatorial dance, I was rebuffed. I later learned that while our Moderator has many attributes, dancing might not be one of them.

The last several years it has seemed that those responsible for the Young Adult Advisory Delegates (YAADs) have scheduled activities for them which conflict with the timing of the dance. For instance, this year YAADs were given the opportunity to be bused to the nearby Mall of America, yet a few opted to skip the mall and come to the dance, and a few younger people who were not YAADS also attended the dance.

I think attending the Witherspoon Dance would have been a better GA experience for YAADS than going to the Mall of America. The Witherspoon Dance is a fully inclusive celebration of life and an opportunity to either relax and unwind or dance away pent up energy after days of sitting in meetings, scheduled for the evening after committee work has concluded and before the plenary work begins. Busing YAADS to the Mall of America only helps perpetuate a culture of decadent consumerism that is often at odds with the gospel.

I heard there was a rumor circulating before the dance that the Witherspoon Dance was “the Gay Dance”. Because of the open and inclusive justice stance of the former Witherspoon Society, now Presbyterian Voices for Justice, LGBTs have always felt safe attending to the dance and dancing with one another. The largest percentage of people at the dance, however, was probably not LGBTs, and there were at least a few heterosexual married couples in the room as well as on the dance floor.

For the record, my wife and I, as we at several Witherspoon Dances, were two of the last people on the dance floor, staying till the very last dance.  And for the record, as the evening drew to a close and only three men and sevral women were still on the dance floor, two of the men were members of New York City Presbytery and the third was a member of Hudson River Presbytery, proof positive that New Yorkers rock.
Posted by John Edward Harris at 9:38 AM