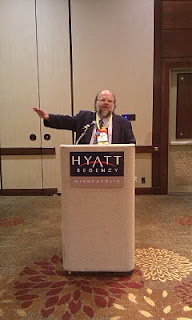 Early Tuesday evening I attended the “30th Anniversary Dessert - Presbyterian Peacemaking Program” in the Hyatt’s Nicollet Ballroom BC. 2010 marks the 30th anniversary of the adoption of Peacemaking: The Believers Calling, and I wanted to attend this event because I was a Youth Advisory Delegate to the Presbyterian Church (U.S.A.) General Assembly in Detroit, the Assembly which adopted Peacemaking: The Believers Calling.

As a result of my experience with and exposure to the adoption of Peacemaking: The Believer’s Calling in 1980, peacemaking has been near and dear to my heart ever since. I was active in the peacemaking fellowship at Princeton Seminary while I was a student. I chaired the Peacemaking Committee of Shenandoah Presbytery for a few years and was a member of the Synod of Mid-Atlantic’s Peacemaking Partnership. I attended the Peacemaking Conference when it was held at Hoffstra University and, along with a group from Shenandoah Presbytery, attended a multiday United Nations Seminar in New York City (years before I moved there).

Over the last thirty years I have witnessed the Office of Peacemaking blossom and grow, transform and morph, first under the leadership of Richard Kilmer, then Sara Lisherness, and now Mark Koenig (photo right).

Without a printed program I am hesitant to list all the people who were introduced and spoke at the 30th Anniversary Dessert because I did not have the time to confirm the correct spelling of their names. The evening’s keynoter, Dr. Alvine Laure Siaka, spoke about the importance of HIV testing and noted that each and every one of us is either infected with or affected by HIV!

The event offered me the opportunity to catch up with William S.J (Presbyterians will know who I mean), who has at times worked with programs related to the Office of Peacemaking and with whom I have worked with on several projects over the years. Catching up with folks like him is one of the greatest benefits of attending the General Assembly.
Posted by John Edward Harris at 5:00 PM