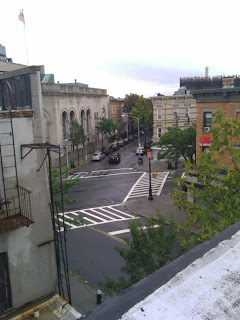 It was a somewhat quiet night in spite of Irene. We heard a loud bang late in the evening. Only later, when I walked the dog (in the rain), did I learn that a hit and run driver apparently slammed into a decorative metal fence at the corner. This morning, I learned that the driver plowed into fences at both corners.
This morning, when I walked the dog (in the rain) around 8:00 AM I saw many leaves and twigs, and a few small branches, but no apparent damage or debris. While walking around the block I saw only one other person who was out taking pictures, and maybe three cars, one of which was a NYPD patrol car.
Later this morning I climbed up on our flat roof to clear debris out of the only drain, as up to six inches of water can collect on the roof when the drain clogs and the roof started leaking last night. I cleared out the drain and the roof is now free of water. I hope that we will not experience any more leaks for a while. While I was up on the roof, I also took a couple pictures. 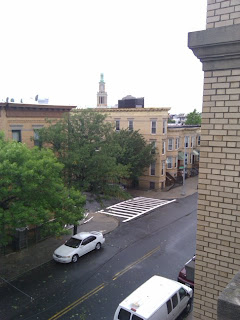 At 11:00 AM Sunday morning, the rain has stopped, the wind has diminished, and some sun is starting to shine, but some more wind and rain might still be coming. We have not lost power or personally experienced any problems. All is well around Ridgewood, Queens, NY, but other parts of New York City are without power and there is some flooding due to both rainfall and storm surge. The situation sounds worse over in New Jersey and out on parts of Long Island. My Brother-in-Law and his family live in Atlantic Highlands, NJ and lost power over the night.
First hand, eyewitness reports from the Sebago Canoe Club on Paerdegat Basin off Jamaica Bay are that our club dock has held, all boats are secure, and there is minimal water in the clubhouse, mostly from rain. I will not know about our 24-foot sailboat docked in Mill Basin until later today or tomorrow.
Posted by John Edward Harris at 11:09 AM No comments:

Unbeknownst to me at the time, my preparations for being in the path of Hurricane Irene began about thirty-five years ago with amy initial First Aid Course. Advanced First Aid, CPR, Water Safety Instructor, and Emergency Medical Technician courses followed that course. I would eventually serve as a volunteer EMT for a couple years in West Virginia and New Jersey, and work as a professional EMT Ambulance Attendant for nine months in Richmond, VA. This training and experience has helped me feel prepared for almost any type of emergency.

A few years after my initial First Aid Course, I took the Outdoor Educators Course of the National Outdoor Leadership School. While I do not think of NOLS as a survival school, the skills and philosophy I learned through NOLS has served me well not only while backpacking in the backcountry but also car camping along North Carolina’s Outer Banks and vacationing in the Bahamas. NOLS has taught me to be prepared, to make do with what you have, to improvise, and to assess risk to insure maximum safety.

Almost four years ago, my wife and I were vacationing on Eleuthera, one of the outer, and less developed, islands of the Bahamas. Near the end of our planned weeklong stay in a rented home, Tropical Storm Noel passed over the island, lashing us with tropical force winds and horrendous rain for at least two days and a night. Our newlywed neighbors and we were the only people within a mile. For three days and two nights, we survived without power, without running water, and without communications, except minimal cell phone service. Fortunately, we had some non-perishable food and were able to cook with propane.

When the wind and rain finally stopped, the four of us, already on the island two days longer than expected, drove as far as we could along the dirt road leading back toward the main road until we encountered water across the road, water too deep to drive through. With luggage held above our heads, we walked through water up to our calves on several occasions until we reached a small village. Parts of the village were flooded, including the road.

When people ask us if we were ever scared while on Eleuthera, with Tropical Storm Noel passing nearby, we say no. We think we got more for our money than expected. We stayed on the Island an extra couple of days and ended up having an unexpected adventure vacation. It is one of the more memorable vacations we have had and we would not have traded it for two weeks anywhere else in the world.

Last night my wife and I joined nine other members of the Sebago Canoe Club to kayak on Jamaica Bay. The bay was nearly empty of boats, and birds. Along the eastern coast flyway, water birds generally fill the trees along the shore as well as the skies. Last night, however, it was eerily quiet and we saw only a few birds. The only other boat that came anywhere near us was a NYPC Patrol Boat. We had the bay to ourselves, less than 24-36 hours before the arrival of Irene.

Although a few clouds had already starting moving in, the Bay was nearly flat during our paddle. Just past the midpoint of our two-hour trip, we caught a stunning red sunset as we paddled out from behind one of the Bay’s larger islands, Canarsie Pol. The sunset rivaled any I have ever seen.

Back at the clubhouse, we rinsed off our boats and stowed our gear. Sitting on club’s dock in order to escape the mosquitoes, we enjoyed pizza, beer and wine as we shared stories and news related to the storm, talking of paddles past and present, and speculating what the scene might look like in 24-36 hours. I thought it was amazing that in 24-36 hours an 8-12 foot storm surge could very well inundate that dock and flood our clubhouse.

This morning my wife and I drove back down to Jamaica Bay. Our first stop was our sailboat, the Mischief, docked in Mill Basin. I added some shock cord to the lines, double checked the lines, added an extra line, and removed some valuables from the boat. As we left, I knew the rest was up to nature. We then returned to the Sebago Canoe Club on Paerdegat Basin to help with storm preparations but most precautions had already been taken, so we soon headed home.

With various camping gear, including freeze-dried food, backpacking stoves, and flashlights stored in the basement, I think we are prepared. We normally have various radios, flashlights, and batteries around the house, as well as candles, an oil lamp, and a kerosene lantern. We did buy a few gallons of fresh water, made some extra ice, and filled poly bottles with fresh tap water. We also moved some outdoor plants off steps to a lower level against the house and moved some backyard furniture and tools into the basement. We are keeping cell phones plugged in so their batteries will be fully charged when the power goes out.

All we can do is hunker down and wait. The preparations begun almost thirty-five years ago will have to be enough.

I shot this month’s header photo from Mount Mitchell Scenic Overlook, Atlantic Highlands, NJ. According to the brochure I picked up at the park, “At 266 feet, this overlook sits on the highest natural elevation on the Atlantic coastal plain, providing beautiful views of Sandy Hook, Raritan Bay and the New York skyline. On a clear day, Mount Mitchell provides a panoramic view across Sandy Hook and Raritan Bay to the landscape of 4 of New York’s City’s 5 boroughs. Visitors can see the Verrazano Narrows Bridge, the WTC Site, the Empire State Building and, more immediately, the historical structures and topography of Gateway National Recreation Area (Sandy Hook) including the lighthouse.
Because I shot this photo from a Summit (the 266 foot “summit” of Mount Mitchell), but the view looks out over the shore, this photo will serve double duty as the Summit header photo for August 2011 as well as the Shore header photo for September 2011.
Posted by John Edward Harris at 11:30 PM No comments: