A Prayer for Newtown

This was the first petition in the Prayers of the People at North Church Queens this past Sunday, December 16, 2012.  I wrote it Sunday morning, just before worship.

God of comfort and consolation,
our hearts are heavy this morning,
as are the hearts of our nation and the world.
As Rachel weeps for her children in Ramah,
we bitterly weep and wail for the twenty children
of Sandy Hook Elementary School in Newtown, Connecticut,
and also for the six teachers and school administrators there
tragically and senselessly gunned down this past Friday.
As we raise our lamentations to you,
we also pray that you will comfort and console the Newtown community,
the parents, family and friends of those slain,
the first responders who faced an unimaginable and unspeakable scene,
and all those seeking to make sense of the senseless.
Never let our prayers serve as an excuse for inaction,
so motivate and empower us as individuals and as a nation
to address our culture of gun violence,
violence in the media,
and violent video games,
which desensitize us and our youth to absurd and inexcusable violence.
Posted by John Edward Harris at 5:58 PM 1 comment: Links to this post

Homage to a Hobbit 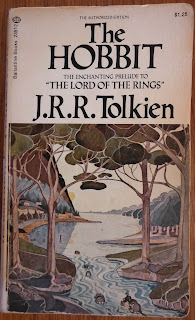 Roads go ever ever on,
Upon the lands new and green,
Clearing obstacles hither and yon,
Until they shine upon silver screen;
Electrons, photons, binary bytes,
Images no eye has ever seen,
At last its tale will be told in lights,
Opening in theaters December fourteen.

by John Edward Harris
with apologies to J.R.R. Tolkien

The cover of Tolkien’s The Hobbit first caught my eye in the spring of 1974. I was a sophomore in high school and attending a planning meeting for a regional week long youth conference. One of the other youth on the planning task force, an older youth, was carrying around and reading a copy of The Hobbit. The paperback’s cover fascinated me. I asked its bearer about it and either his reply, or the fact that I thought that he was really cool, convinced me that I needed to read The Hobbit.

I searched for, soon purchased, and read the Hobbit. The Hobbit led me to Tolkien’s classic The Lord of the Rings trilogy. Tolkien eventually led me to C.S. Lewis and his Christian Fantasy Chronicles of Narnia and Space Trilogy.

Tolkien and Lewis kindled within my adolescent heart and mind a new love of and respect for the Jewish Scriptures, what we Christians refer to as the Old Testament. They enabled me to read the Jewish Scriptures with new eyes and ears as well as a new awareness—to read the thirty-nine books of Genesis through Malachi not only as Holy writ but also as heavily layered, finely textured, highly mythic, and metaphorical literature filled with poetry and song which included stories of personal struggles and epic battles as well as genealogies and accounts of great kings and kingdoms—not unlike the fantasy works of Lewis and Tolkien, including The Hobbit.


Posted by John Edward Harris at 7:38 PM No comments: Links to this post