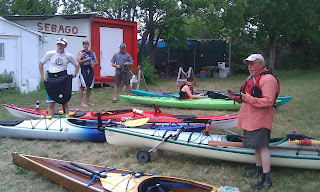 One of my favorite Sebago Canoe Club activities and trips during the paddling season is the monthly Full Moon Paddle. Scheduled for the Friday or Saturday evening closest to Full Moon, the paddle, usually led by Phil, heads out into Jamaica Bay before sunset and returns after the full moon rises. The full moon is not always visible because of cloud cover, so there is always an air of expection about the paddle, “Will we see the moon, or not?”

Fifteen paddlers gathered in the early evening of Saturday, June 26, for the first Full Moon Paddle of the season. Some of them are pictured top right as we prepared for our paddle.  Tony and Fran were the last to arrive and soon afterward, around 7:45 PM, we were on the water and headed for a small island in Jamaica Bay called Ruffled Bar, about a six mile round trip.

The fifteen lunatics included our trip leader Phil plus Dottie, Walter, me, Vicki, Dennis, Cleo, Patrick, Jen, Chris, Andrew, Eugene, Tony, Fran, and Marty, all experienced paddlers. I was able to paddle one of my favorite club boats, a seventeen foot Necky Montauk.

Lights are an essential piece of safety equipment on Full Moon Paddles. While I paddled with an ACR C-Light attached to my aft deck via a suction cup, an activated cylemine light stick hanging off the back of my PFD, and a Princeton Tec H2O headlight hanging from around my neck in case I needed it, other paddlers had their own similar but also unique lighting configurations. The key to lighting for night paddling is to light to be seen, not to see, and not to blind other paddlers. Some did better than others regarding the last criteria.

The evening presented very little wind and the surface of Jamaica Bay was alsmost as sooth as glass.  There were no bugs, except near Ruffle Bar, and any daytime oppressive heat and humidity had already dissipated.  In other words the paddling conditions were almost ideal.

Phil, the usual leader of Full Moon Paddles, almost always takes a package of Fig Newton’s with him on such paddles and this one was no exception. When we reached near the shore of Ruffle Bar we rafted up, Phil had someone open his day hatch and pull out the cookies, and then passed them around for all to enjoy. After our rest and snack we headed back across the bay and for the club house even though the moon had yet to be seen.

While paddling back toward Paerdegat Basin, with the skyline of Manhattan in the background, we were surprisingly treated to fireworks that appeared to be launched from two locations in the vicinity of South Street Seaport. We had no idea why there would have been a fireworks display but we were glad there was.

Occasionally someone would turn around to see if the full moon was yet peeking from behind the clouds. Finally we heard a loud “howl” that would have made Allen Ginsberg proud as the one of our paddlers finally saw the disk of full moon. But as soon as it appeared it disappeared again, only to occasionally reappear, again to sounds of howling kayakers.

We were back at the clubhouse by around 10:00 PM, and with boats and gear washed and stowed, some of us broke out covered dishes featuring garden salads, fruit salads, nachos, cheese wheels, and sausage accompanied by port wine, white wine and sangria, and we enjoyed a late dinner. Sebago has a strictly enforced “No Alcohol” policy before and during trips, but after trips is another matter altogether, and a little eating and drinking with friends and paddling companions after a paddle is one of the many reasons I enjoy being a member of the Sebago Canoe Club, that and the kayaking.

By the time we finished and were leaving the grounds the Full Moon had risen well above the clouds and we enjoyed a Full Moon drive home.

This trip report is cross posted on the Sebago Canoe Club Blog.
Posted by John Edward Harris at 12:01 AM