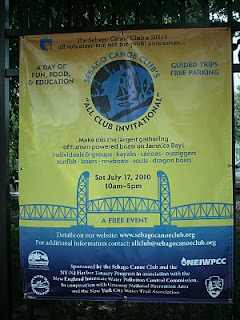 It was publicized as “A DAY OF FUN, FOOD AND EDUCATION” with the potential to be “the largest gathering of human powered boats on Jamaica Bay”. It was fun. There was plenty of food. And while no papers were researched and written or quizzes and exams taken, it was educational. What did I learn? That a small volunteer club on the can make a big, positive impact.


In the words of Phil Giller, one of its main organizers, the Sebago Canoe Club’s (First Annual?) “all club Invitational was a great success. We are working on final numbers but we had OVER 100 guests on the water and 60 members signed in, so my unofficial count is that we had over 150 people on the water at 1 time.” Considering that more kayakers went out after some returned, I estimate that the total number of people on the water was even higher.
For awhile, the Sebago dock was perhaps busier than runways at nearby JFK Int’l Airport, but the traffic was ably controlled by the Dock Master (or is that Mistress). With kayaks, sailboats and row boats of all shapes and sizes sometimes departing and arriving at the same time, there was not a single mishap. The dock and walkway were at times congested with no room on the dock for any boats until some were removed, but traffic kept flowing. The main grounds of the Sebago Canoe Club, around the club house and especially between the club house and the dock, was also crowded with folding kayaks being assembled, kayaks being outfitted, and guests milling about as they returned from a trip, were waiting for a trip, or simply enjoying food and beverages provided by the club or donated by local businesses.
While I spent most of my time documenting the Invitational by taking pictures, I also helped clear the docks by carrying kayaks off the dock and up to the lawn or wash racks. And although I had not planned to paddle, I ended up helping to co-lead the last trip of the day, an unscheduled and impromptu paddle over to the salt marsh near the entrance to Mill Creek, and back. 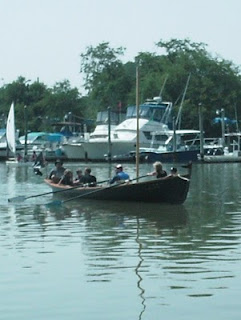 There were seven kayaks and eight people on that last trip of the day. At least a few of them had never been in Jamaica bay before. One of them was a young boy who, along with his dad, climbed out of their tandem sit-on-top to lay in the small channel as the water, as warm as bathwater, rippled over their bodies as it made its way out of the marsh and back into the bay as the tide was going out. Seeing the smiles on the little bys face and hearing his giggles was reward enough for having co-led the trip.
While many of the sights and sounds of the day were memorable, I may never forget seeing a large rowed boat, the “Bird”, Jolly Roger flying aft, approaching the dock (photo bottom right). Having rowed over from nearby (well, sort of) Floyd Bennet Field, the Buccaneers, sans any rum or Johnny Depp as Captain Jack Sparrow, boarded our dock and helped themselves to grog and grub. The handmade vessel was so unique that many were walking down to the dock just to look at.
The All Club Invitational was the largest event and gathering of people and human powered boats around the club and on Paerdegat Basin I have witnessed in my nearly three years of being associated with the Sebago Canoe Club. Something tells me that fact will not remain true in another year or two.

Many of the pictures I took throughout the day can be seen on my Picassa page.
Posted by John Edward Harris at 4:48 PM