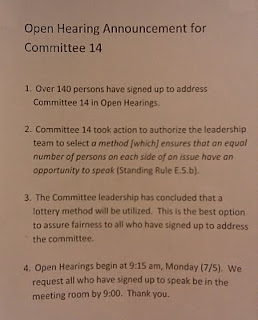 With 19 Assembly Committees, no one can follow the work of them all. I am following the work of Committee 14, the Middle East Peacemaking Issues Committee. The committee is handling one of the more contentious and emotion laden issues before the Assembly, the Report of the Middle East Study Committee, as well as related overtures and Commissioner Resolutions. Unlike other controversial issues such as Marriage of same sex couples and Ordination of Lesbian, Gay, Bisexual and Transgendered Presbyterians, Middle East Peacemaking is more multi-faceted, complex, and nuanced issue.

The committee heard from representatives of the Middle East Study Committee and the Mission Responsibility Through Investment Committee Sunday afternoon. Monday morning the Committee heard testimony in an open hearing. Over 140 persons signed up to testify in open hearings, far too many than time would allow, so the Committee Leadership, as authorized by the committee, chose to select people to testify through a lottery system (photo top right).

At past Assemblies other committees have used a lottery to select people to testify but in a much more efficient way. A lottery was used well before the actual hearings to select those who would speak and then the names of those selected were listed in order of appearance so that they could be in the room, be prepared, and lined up to speak two, three or even four deep so that no time would be wasted waiting for people to come to the microphone, a fair and efficient process. 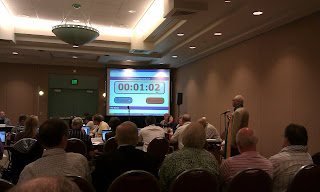 Even though I am only an observer I was frustrated by the process of selection employed by the leadership of Committee 14. The committee leadership used a lottery during the hearing process, picking names at random and then calling the person’s name to come to the microphone and testify (photo bottom right). Some whose names were called were not in the room and much time was wasted while it was determined that they were indeed not present. Because no one knew who the next speaker would be until the next name was called there was also significant lag time between speakers, lag time which could have been avoided if speakers had been lined up two or three deep. A more thoughtful and efficient process could have easily doubled the number of speakers who were able to address the committee. Overall it was a somewhat confusing and time consuming process that could have easily been avoided.
After a short break the committee reconvened to hear a presentation from Middle East Study Committee Chair Ron Shive, a presentation that focused on the Study Committee’s Recommendations, all 39 of them. After his presentation the committee divided up into small groups to process their time together.
Posted by John Edward Harris at 2:52 PM