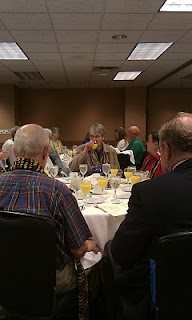 A hundred to a hundred and twenty daughters and sons of Sophia gathered in the Lake Superior Ballroom of the Minneapolis Hyatt for the Voices of Sophia (VOS) Breakfast, sponsored by Presbyterian Voices for Justice (PVJ). VOS was created in 1995 in response to the excitement generated by the first ReImagining Conference, to affirm the full participation of women in the life of the Presbyterian Church (U.S.A.).


During the Feast, the Reverend Eily Marlow, who was still in High School when the first ReImagining Conference was held in Minneapolis in 1993, remembered one of the moving forces behind Re-Imagining, the Reverend Sally Hill. She also invited guests to remember other feminist women of faith and leaders in the formation of VOS in St. Louis in 1995, including Virginia Davidson, Jane Parker Huber, and the Reverend Mary Jane Patterson, sheroes of the faith no longer with us in the flesh. 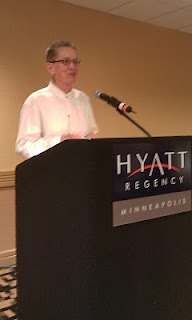 As Sophia’s daughters and sons were finishing their feast, Carlson invited guests to bless Moderator Bolbach by singing three times the Sophia Blessing, and then introduced the morning’s speaker, the Reverend Dr. Christine (Chris) Smith (photo bottom right), who also received a triune Sophia Blessing. Smith’s topic was Reclaiming Church: De-Centering Privilege as an Act of Global Citizenship. Am out Lesbian in the United Church of Christ, Smith is a Professor of Preaching at United Theological Seminary.

Smith’s presentation, which challenged participants to consider the implications of de-constructing privilege and overcoming the great human divide, was highly personal and conversational. Rather than telling participants what to think she invited them to engage in personal and theological reflection on what it means to be human, occasionally pausing to invite feasters to ask questions or make comments in response to her presentation.

Following Christine Smith’s presentation, the Reverend Mike Smith (no relation to Christine) reprised his More Light Presbyterian fundraising pitch, but this time urging guests to financially support VOS. After guests read Wisdom’s Blessing responsively, Members of That All May Freely Serve, led by Lisa Largess, led guests in song as they began to depart.
Posted by John Edward Harris at 10:16 AM