219th GA: Breaking Down and Packing Up the Exhibit Hall Booths 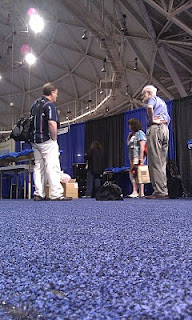 The Exhibit Hall at the General Assembly was scheduled to close Wednesday evening at 7:00 PM, but traffic was so light in the Exhibit Hall early Wednesday evening that many Exhibitors started breaking down and packing up their booths prior to the 7:00 PM Closing Time, the Presbyterian Voices for Justice Booth among them. By the time I arrived at the Exhibit Hall just a few minutes before 7:00 PM to help dismantle and pack booth materials, most of the work had already been done by Vicki, Mitch and Sue with a little help from Doug (photo right). There was very little for me to help with when I arrived.

Because there was as staggered arrival of Exhibitors as the General Assembly was about to begin, setting up the booths in the Exhibit Hall seemed to require more time than taking them down at the end. At the end, in a matter of just a couple of hours the Exhibit Hall was transformed from a collection of booths offering all sort of information and material, even selling books, gifts and crafts, to a hodgepodge of packed boxes and crates as well as piles of garbage.

We finished dismantling and packing up by 7:30 PM and were on our way out of the Exhibit Hall for the last time. Someone else from PVJ would come back in the morning to retrieve the three plastic packing crates that we left behind. I hope they were, in fact, picked up.
Posted by John Edward Harris at 6:45 PM