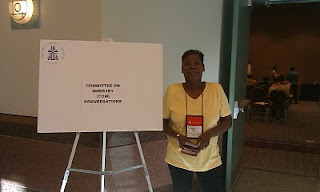 The format was similar to one I experienced two months earlier at an Office of Vocations event following a Board of Pensions Regional Governing Body Consultation in Tampa. This time, however, there were many more people in attendance and the topic was not as focused.

After brief introductions by Marcia Myers, Director, Office of Vocations, those in attendance were invited to respond to questions that had been written on index cards by participants. The questions ranged from issues related to policies, practices and “this is how we do it, how do you do it.” Overall the time I spent in listening to and participating in the conversation was well spent and gave me the opportunity to step of the insular confines of New York City Presbytery to hear from colleagues across the country. In other words, I am glad I attended.

I applaud the Office of Vocations for piggybacking educational events and opportunities for sharing with colleagues at gatherings such as Board of Pensions Regional Governing Body Consultations and the General Assembly. It is an efficient use of time, staff, and financial resources.
Posted by John Edward Harris at 4:00 PM