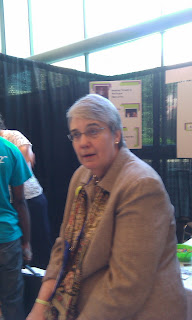 Six individuals (five Ministers and one Elder) are standing for election for moderator of the 219th General Assembly, meeting this week in Minneapolis, Minnesota. The person elected will not only moderate the bulk of the Assembly plenary but also serve for the next two years as a representative of the Presbyterian Church (U.S.A.) with a bully pulpit to interpret the work of the Assembly to the Church and world and to shape the life and work of the Church through their power of appointment.

This Year’s slate is Minister heavy. Of the six candidates, Bolbach (photo top right) is the only Elder, the other five all being Ministers. All six candidates have selected Ministers as their Vice Moderator running mates. Thus the Elder Cindy Bolbach and Minister Landon Whitsitt (Heartland Presbytery) is the only balanced ticket that would guarantee at least one Elder serving in one of the highest two elected offices.

I think two of the candidates, The Reverend James Bell, from Philadelphia Presbytery, and the Reverend Jin S. Kim, from Twin Cities Presbytery, have hampered their candidacy by choosing not only another Minister as their Vice Moderator running mate but a Minister from their own Presbytery. Bell selected The Reverend Wonjae Choi, also from the Presbytery of Philadelphia, while Kim tapped the Reverend Matthew. In my mind, their choice of a running mate calls into question their awareness of and commitment to the need for diversity, at least geographical diversity.

With six candidates and a majority needed to elect, we are likely to require several ballots before a Moderator is elected. Usually and as in previous years, Commissioners voting for candidates that receive the fewest votes will, on later ballots, vote for another candidate of their liking, until one candidate receives a clear majority, and this can take several ballots to sort itself out. I am not much of a prognosticator but I predict this year’s election will require at least four ballots before a Moderator is elected.

The Election of the Moderator is scheduled for tonight beginning at 7:00 PM. When it will end, who knows?
Posted by John Edward Harris at 2:26 PM