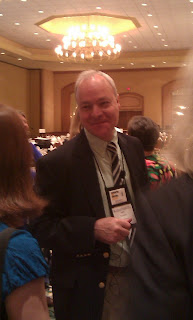 The Princeton Seminary Luncheon was by far the largest of any of the meals I attended while at the 219th General Assembly. I estimate that 300 to 400 guests were in attendance, not surprising since more Presbyterian Ministers are graduates of Princeton Seminary than any other seminary. Not all in attendance were Ministers however, as some Princeton graduates have served their communities and the church without seeking ordination.

Each guest was gifted with a Princeton Seminary seal label pin and a 2GB flash drive with two short videos about the seminary preloaded. Those in attendance were welcomed by William Robert Sharman III, director of alumni/ae relations. After a few announcements Seminary President Iain R. Torrance (photo right), the Seminary’s sixth president, introduced various Seminary Staff, spoke about current and future programs, welcomed questions, and introduced two short videos. As I tried to listen to the President’s remarks in spite of his soft voice and a malfunctioning sound system during the first part of his remarks, I was particularly interested in his mentioning Phyllis Tickle latest book and his reference to “a rummage sale of ideas”. Of the many new programs and initiatives he highlighted, the most visible and ambitious are plans to build a new library, one that would be the second largest theological library in the world.
Posted by John Edward Harris at 4:27 PM