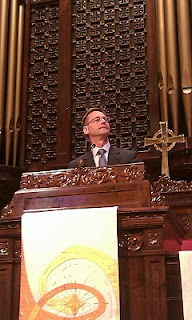 Listed in the official 219th General Assembly (2010) Program Book as the “Covenant Network Commissioner Dinner” but with printed programs calling it “Commissioners' Convocation Dinner” and held at the Westminster Presbyterian Church,  this gathering or mostly progressive Presbyterians and friends last night offered the opportunity for about a hundred Commissioners to the General Assembly as well as Observers and others to enjoy food, fellowship and to hear from Doug Nave (photo right).
Doug spoke in the sanctuary and from the pulpit of the Westminster Presbyterian Church. His remarks were preceded by a Gathering Litany and Hymn. They were followed by a Sending Litany and Closing Prayer. Though not billed as a worship service, it was clear that Doug’s comments were being set within a worshipful setting.
Doug is an attorney, a Covenant Network director, and a member of Fifth Avenue Presbyterian Church in New York City. His topic for the evening, as listed in the printed program, was That’s For Sure but I am not sure why. I would have titled it “Coming Out as a Presbyterian”. If I heard Doug correctly, all progressive Presbyterians need to come out, that is to self-identify themselves as Christians who value and affirm the historic principles of our Reformed and Presbyterian tradition, principles such as “God alone is Lord of the conscience” and “there are truths and forms with respect to which [people] of good characters and principles may differ” and "’Ecclesia reformata, semper reformanda,’ that is, ‘The church reformed, always reforming,’ according to the Word of God and the call of the Spirit.” It is these very historic principles, and others like them, that point the church to change its stance on the ordination of those who are Lesbian, Gay, Bisexual or Transgendered and to change its stance on marriage.
Doug pointed out that while the church once defended the geocentric universe as a matter of doctrine that we know that the earth revolves around the sun. He noted that whereas the church was in its early life communistic and a peace church that we now embrace such just war and capitalism. He observed that we once defended as a matter of doctrine the institution of slavery but that we now embrace equal rights for all. Whereas the Presbyterian Church used to believe that women could not and should not be ordained we now believe that God calls men and women to all ministries of the church. Similarly, while the church has historically argued that marriage is only between a man and a woman that it is time to recognize that same sex couples also fall in love and are already living in relationship that in every other way resemble marriage and are so legally recognized by some states, and so it is time for the church to change its understanding of marriage and to not only recognize marriage between same sex partners but to also empower its Ministers to celebrate these marriages where state law permits it.

After those in attendance were given an opportunity to enjoy their meal, the six candidates for General Assembly Moderator, some with their choice of Vice Moderator running mates in tow, each spoke briefly to those gathered.  This offered me my first opportunity to begin thinking about who I would vote for if I were a commissioner.
The Covenant Network was formed over a dozen years ago in order to affirm the historic principles of our Reformed and Presbyterian tradition after they were called into question by the Adoption of Amendment B, now G-6.0106b in the Book of Order, a provision which stripped away the session’s historic right and responsibility to decide who to ordain as Elders and Deacons and the presbytery’s historic right to decide who it will ordain as Ministers.

Thanks to the Presbyterian Voices Website, here is a link to the entire text of Doug's presentation.
Posted by John Edward Harris at 12:01 AM