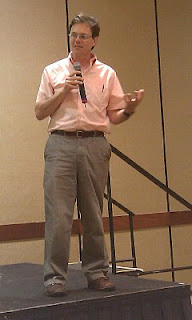 Approximately a hundred “green people” gathered at the Presbyterians for Earth Care (PEC) Annual Luncheon in the Nicollet Ballroom D at the Minneapolis Hyatt Tuesday of the General Assembly. Jenny Holmes, the PEC Moderator, welcomed guests and invited leaders of friendly and like minded groups to introduce themselves.

Manly Olson, accompanied on guitar by his son Mark, led the group in the singing of “In A Round World”, with text by Manley (1996) set to the tune of Bunessan. Leslie Reindl then offered a Table Blessing

As guests were finishing their meal, Jenny Holmes presented two William Gibson Award, the first to Bob Stivers, “a pioneer in Christian environmental ethics”, and the second to the Reverend Kristina Peterson, the pastor of Blue Bayou Presbyterian and a community based researcher and organizer on disaster preparedness and sustainable communities. I have attended a few conferences where Stivers presented and have read one or more of his books, so I know Stiver’s work but do not personally know him. On the other hand, I have known Kristina for years as we once both lived and ministered in West Virginia where we were both active in the environmental movement and worked together on a few environmental campaigns. We sat next to each other at the breakfast, which gave us an opportunity to catch up with one another.

The Executive Presbyter of Twin Cities Presbytery presented the North Como Presbyterian Church with the Restoring Creation Award “in recognition of its years of ever-expanding programs and activities that not only transformed the life of the church, but also the ways in which its members lived their lives outside of church.” North Como sounds like a great church that takes environmental stewardship seriously. I wonder if there are any more like it that might be looking for a pastor.

Following the presentation of the above awards, participants were invited to read in unison the Eco Stewards Affirmation of Faith, after which for GA Moderator Rick Ufford-Chase (photo right) offered a keynote Reflection on Leviticus 26:3-6. He challenged people of faith to find a faith community to call home, to dig in their heels, and to stay there for the long haul, noting that the church is the only institution with roots in almost every community. He urged guests to break taboos as they break bread and to defy conventional wisdom about what is possible because conventional wisdom is dead wrong! He also asked those present to resist succumbing to the fear of scarcity. Rick knows what he is talking about because he has and does practice what he preaches.

I needed to get back to the Committee I was monitoring and was not able to stay for the rest of the luncheon, which, according to the program, included an Invitation, an update of Overtures and Resolutions related to Environmental Stewardship, and a PEC Business Meeting which was to include a Financial Report, a Report on the Election, and Announcements.
Posted by John Edward Harris at 10:23 AM