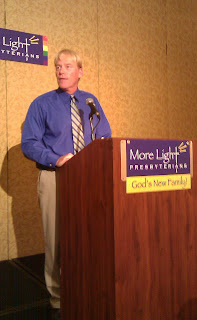 I walked into the third floor lobby of the Hilton a little after 4:00 PM only to see about a hundred old friends I have made through the years at various General Assemblies as well as new friends yet to be made at this GA, many of them wearing rainbow colored knitted and crocheted scarves to signify and symbolize their commitment to an inclusive Presbyterian Church that welcomes all God’s Children, including Lesbian, Gay, Bisexual and Transgendered Children. The event and occasion was the More Light Presbyterian (MLP) National Celebration Reception preceding the MLP National Celebration Dinner. The cash bar enabled some to enjoy a beer, glass of wine, or cocktail before dinner while mixed nuts and pretzels on a few tables served as appetizers before the dinner proper. Conversation flowed freely.

Before we moved into the ballroom for dinner, MLP Executive Director & Field Organizer Michael J. Adee (photo right) introduced and honored the Don Stroud, who for the past several years has faithfully served the Baltimore Chapter of That All May Freely Serve. Michael also introduced a representative of the Oak Park Church, a More Light Church near Chicago, and Samuel Chu, Executive Director of California Faith for Equality. Samuel briefly spoke about the need to keep faith in the center of equality and to keep equality in the center of faith. Jean Audrey Powers of the United Methodist Church and Ross Murray and Brett Bowman of Lutherans Concerned were also introduced and shared remarks.

Around 5:00 PM we moved into the Ballroom for dinner, where eventually about 150 people gathered around tables. MLP Board of Directors Co-Moderator Vikki Dearing welcomed guests. MLP Board of Directors member Beth Van Sickle blessed the Meal. After dinner Michael J. Adee spoke about being a church of the Heart, a Church were love matters as much if not more than theology, a church which lives out Micah’s vision of doing justice, loving kindness and walking humbly with God, a church that takes to heart Jesus’ admonition to Love God with all our heart and mind and soul and to love our neighbors as ourselves, a church of the heart rather than a church of the law, a church in which love and the God of love trumps theology. Michael also shared that MLP had hoped 1,500 rainbow colored knitted and crocheted scarves would be available by this General Assembly. Inspired by the Shower of Stoles project, begun prior to the 218th General Assembly two years ago, and spearheaded by the Reverend Janet Edwards, 1,700 rainbow colored scarves had been knitted and crocheted in time for this General Assembly!

Following Michael’s remarks, the Reverend Rebecca Voelkel of the Institute for Welcoming Resources offered the Keynote Address. Focusing her remarks on the LGBT movement as one of many forces of power, I felt like I was witnessing an example of “what goes around comes around” as I heard Rebecca saying that the LGBT movement, which began in the broader social justice movement, must now embrace the broader concerns of social justice and be concerned not only for justice for LGBTs but justice for people of color, for women, for the poor and oppressed, and for immigrants. May the circle be unbroken.

After Rebecca concluded her address the Reverend Ray Bagnuolo, a member of the MLP Board of Directors, addressed MLP’s legislative strategies at this assembly. MLP Board member the Reverend Mike Smith then invited all those present to feel good about giving financial support to MLP by directing the person at each table closest to the breadbasket to empty the basket and pass it around to be filled with green bread bearing images of former Presidents.

The highlight of many of the dinners at GA is the presentation of awards, and the MLP National Celebration Dinner was no exception. Janet Edwards presented The Reverend David Sindt Leadership Award to the Reverend Jean Southard. Trice Gibbons presented the Outstanding More Light Church award to St. Luke Presbyterian Church, Wayzata, MN. Madeline Jervis presented the Outstanding MLP Chapter award to the Open Doors More Light Chapter, Washington, DC.

Prior to the Benediction and being sent forth, Janet Edward and Patrick Evans led us in a musical dedication of all those 1,700 rainbow scarves. After the Benediction most participants left for the election of Moderator, soon to take place in the Plenary Hall.
Posted by John Edward Harris at 12:39 AM