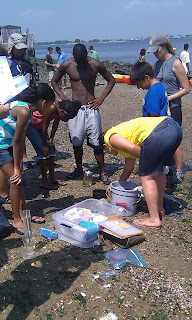 I recently had the opportunity, along with three other volunteers from the Sebago Canoe Club, to provide kayaking support to a group of urban youth and their adult leader, Elizabeth. Part of a three day a week, six week summer program associated with the Rockaway Waterfront Alliance, the youth were planning to kayak from a marina on 59th Street in the Rockaway’s, at the base of Summerville Basin, out into Jamaica Bay and south to a beach few blocks away at the northern tip of 65th street, where they would pick up trash and measure water quality.

A third to a half of the youth had never kayaked before, but after a short land based lesson about how to paddle and properly fit and wear a PFD, the teenagers took to water like new born fish. With Elizabeth and the eleven kids paddling six tandem sit-on-tops and my wife and I paddling our single sit-on-tops and Tony and Jake paddling traditional kayaks, we paddled out into Summerville Basin. With an adult to youth ratio of nearly one to two, we paddled further out into Jamaica Bay and the short one and half miles to the beach in record time, so quickly that some who were driving had not yet arrived by the time we reached the beach.
After a little more paddling and water play as we wated for the rest of the group to arrive, we beached our kayaks, donned gloves, grabbed garbage bags, and started picking up trash. I will simply never understand how some people can so mistreat their living environment. We collected the usual collection of bottles and cans, aluminum foil, several pairs of shoes, empty fast food bags, Styrofoam fast food containers, and an odd assortment of other trash. In a matter of minutes I filled two large garbage bags with debris.
After cleaning up the beach, Rebecca, an educator associated with the New York City Soil and Water Conservation District as well as the Rockaway Waterfront Alliance, unpacked a plastic container of lab equipment and assigned the youth monitoring tasks (photo top right). After collecting water samples the kids measured turbidity, PH, salinity, and water temperature, recording their findings in order to help build a data base. Watching Rebecca and the teenagers at work reminded me of my High School Chemistry class and my participation in a Chemical Engineering Explorer’s Post. In ten or twenty years, one of these urban teenagers measuring water quality in Jamaica Bay might be their generations Rachel Carson Jasques Cousteau. 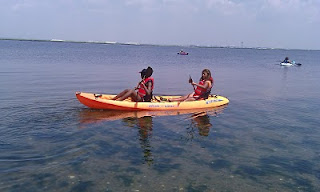 An hour or so after we landed on the beach we climbed back onto and into our kayaks and paddled back to the Marina (photo bottom left). Along the way, my senses and powers of observation having been heightened, I saw in the shallow water numerous crabs, mating horseshoe crabs, and along the marsh grass of Summerville Basin a few herons.
After beaching at the marina, without being asked, some of the youth helped us carry our personal boats to our car and even helped to lift them up on the roof racks. As we were leaving they thanked us, said good bye, shook our hands, and even gave some of us a hug. I think they appreciated us being there.
Having left my waterproof camera at home, I was still able to capture a few shots using my phone and I have posted thirty-two of them on my Picasa page.
Posted by John Edward Harris at 9:54 AM