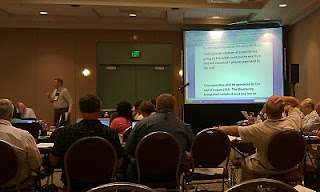 Working throughout Tuesday morning and afternoon, (photo right) the General Assembly Committee on Middle East Peacemaking Issues surprised many observers, and perhaps themselves, by unanimously approving the Report of the Middle East Study Committee “Breaking Down the Walls” after having massaged, wordsmithed, and otherwise edited the report to make it more palatable to those who raised objections. With the Committee having unanimously approved their action, there will be no minority report and the likelihood of any attempt in Plenary to kill or change the report in any major way is nil.

Having observed this committee as it conducted most of its business, I observed the committee begin to gel early Tuesday morning and witnessed what appeared to be a sincere desire to bring to the plenary a balanced report that would likely not totally please anyone or totally alienate anyone.

When the committee acted unanimously I found myself thinking that if this committee, which seemed so divided and contentious Sunday and early Monday could reach a unanimous decision, perhaps there is hope the Israelis and Palestinians can someday do the same.

Once the major bulk of committee work was completed the final few items needing attention were acted on without undo haste or unnecessary delay and the committee adjourned for the last time around 4:30 PM, meaning there would be no need for a late night evening session or even an evening session.

During the Committee’s deliberations the Committee Moderator turned the chair over to the Moderator at least twice. I do not know if the Moderator simply wanted a break or wanted the Vice-Moderator to have a chance to Moderate, but the transitions back and forth between the two were seamless, a compliment to both.
Posted by John Edward Harris at 6:56 PM