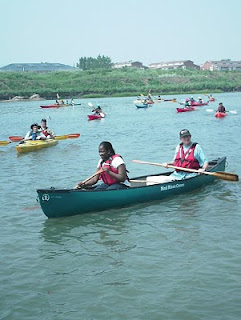 Today’s youth paddle at the Sebago Canoe club was a kaleidoscope of multicolored kayaks and canoes, some sit-on-tops and some traditional, mostly singles but a couple tandems and even one triple, as volunteer members of the club hosted 15 young boys and girls from the Brooklyn Sports Club. With more volunteers than guests, that adult to youth ratio was better than one to one.
The weather was perfect. The water was calm. The youth and their adult leaders started arriving at 10:00 AM sharp and were quickly welcomed, outfitted with paddles, PFD’s, and boats. From the Sebago dock they put into Paerdegat Basin and eventually paddled their way under the Belt Parkway Bridge into Jamaica Bay.
After returning, rinsing off and storing boats and gear, hamburgers and hot dogs were grilled, bocce was played, and shade by the water with a breeze off the water was enjoyed.
After the youth departed, around 1:30 PM, the Sebago volunteers enjoyed their own food and beverages, finishing and cleaning up just as a thunder storm passed over.
Photos from the day, probably more than you would ever want to see, are available via this link to my Picasa sight.

Tomorrow is expected to be a big day at the Brooklyn waterfront club as it hosts its first All Cub Invitational.
Posted by John Edward Harris at 6:53 PM