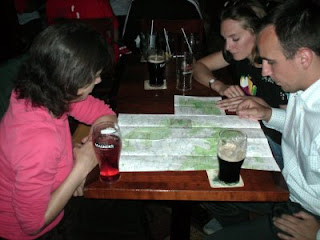 As we usually do every other month, National Outdoor Leadership School (NOLS) alumni in New York City recently gathered to catch up and lift a few pints. And wouldn’t you know, wherever two or three NOLS Alums are gathered, you will find a topo/trail map in the midst of them as they plan their next outing (photo at right). How many times have you seen a top/trail map spread out on a table in a New York City bar?

Last night we gathered at the Dublin House, located at 225 W. 79th St on the Upper West Side. We had originally planned to gather at the 79th Street Boat Basin Café but that outdoor locale was closed due to rain. Apparently the establishments NOLS Alums are prone to frequent are not as hearty and prepared for foul weather as NOLS Alums are, at least not the Boat Basin Café.

Six of us gathered: Gint, Michael, Lori, Mac, Liz and I. At least four of us (me included) have actually been to Dublin and Lori lived in Ireland for a year, which just goes to prove that NOLS Alums tend to be world travelers and adventurers.

Gint and Lori offered first hand reports of the recent NOLS Alum Kayaking trip on the Hudson. We also talked about the economy, music, pets, Chicago cuisine, rowing, roommates, and the new Eastern Mountain Sports store in SoHo, as well as potential future gathering spots, activities and outings, including a backpacking trip in the Catskills (thus the map).

As I have noted before, one of the pleasures of living in New York City is the opportunity to be part of the NOLS Alumni community here in the city and to know that there are others who share my passion for and commitment to outdoor leadership and skills.
Posted by John Edward Harris at 9:45 AM