Death on the Van Wyck 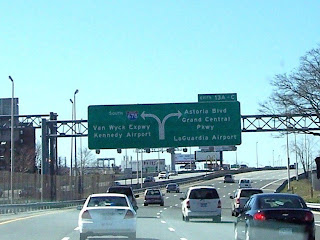 Driving south on the Van Wyck Expressway (Interstate 678, photo right) just south of the Whitestone Expressway and the exit to the Long Island Expressway late this afternoon I saw traffic slowing down ahead of me and coming to a stop in the left hand lane. As I slowly approached the traffic, I saw in the middle of the north bound lanes what I at first thought was a large dog. Being a dog lover with an overweight Lab/Golden/(who knows what breed) lovable rescue at home I tuned on my emergency flashers and started pulling over among the vehicles stopped in the left south bound lane to lend assistance. As I was pulling over, however, I realized that what I thought was a large dog in the middle of the north bound lanes was in fact a human being!

As a former Emergency Medical Technician with both volunteer and professional experience, even though my certifications had expired long ago, my mind quickly changed gears from animal lover to first responder. I parked between a couple other parked vehicles, shifted into park, turned off the ignition, and got out of my vehicle. I climbed up over the concrete Jersey barrier type medium and rushed to the figure lying in the middle of the road. Three others were gathered around but none appeared to be lending assistance.

As I approached closer and was prepared to check vital signs and perform an initial assessment I noticed that the figure’s head was covered with some sort of cloth. One of those standing by said that he had already checked and there no vitals. After a few moments of observation and a visual check of the immediate area, I took his word for it.

I asked the stranger standing near the figure if he had called 911.

He said he had.

I saw a motorcycle nearby and asked if it was the victim’s bike.

The man standing over the figure said no, that the victim’s bike was further ahead. I determined that the nearby bike must belong to one of the other’s standing nearby. I looked north and saw a bike about a hundred feet away.

The Good Samaritan asked me if I had a sheet or something to cover the figure. I did not. Determining that there was no assistance I could offer I climbed back over the barrier separating the northbound from the southbound lanes, got back into my vehicle, and headed southbound down the Van Wyck toward home.

Driving home, adrenaline flowing, brain synapses firing, I began to reflect on what had just happened. Even though I have not worked as an EMT for over twenty-eight years and my certification expired over twenty-five years ago, as I saw the figure lying in the middle of the road my training and experience seemed to take over as if I were on automatic pilot. While I saw my fair share of trauma and death while volunteering and working as an EMT, I have not seen any since other than in the clinical setting of a hospital or funeral home, yet I was not affected by what I saw. Nevertheless I will skip the details.

Now I want to know details. How did the accident occur? Who was the victim? I’ll keep checking the internet and will watch tonight’s local news as I seek to close the loop. I will let know what I find out.

(This post has been updated with a more recent post.)
Posted by John Edward Harris at 9:07 PM

OMG! I saw the same thing and thought the same thing. I was so sorry and hoped that the gentleman was going to be OK,but now I guess not. What I saw stayed with me for the entire evening and night; I too checked the evening news and heard nothing and the first thing I did this morning was to check the internet to learn what happened. I just pray for his family.

John,
Thank you for this post...I think that you are writing about my uncle who passed away in a motorcycle accident yesterday (around 5:30) on the Van Wyck. My family is also trying to figure out what occured...please contact me at nn0218@gmail.com

THIS WAS OUR DEAREST FRIEND KEN, (UNCLE BIRD). HE WAS 44 YEARS OLD. HE WAS THE BEST BUDDY OF MY SEVEN YEAR OLD SON, KYLE. HE WAS A VERY CLOSE FAMILY FRIEND FOR MANY YEARS. HE WAS VERY KIND-HEARTED AND HELPFUL. WE ARE DEVESTATED AND SHOCKED. WE APPRECIATE YOU WRITING THIS BLOG.

I have been away from my computer and the internet all day. I conducted a google search and a bing search with no helpful returns. The above comments are the first real information I have learned.

My friend, I thank u for what u said about my friend. I found your blog from a non relative source that heard about my friend story and thought that it was closly related to my story. After reading your words I have no doubt that u are the person that tryed to help my friend. His name is Ken. He was the only child. A person that will be missed for years to come. His family will be holding a wake for everyone who know him to get together for rememberance. The wake will be held at 866 cranford ave, bronx, ny. The family's phone number is 718-994-0548. I am an active law enforcement member and i know what it takes to be a hero. The family of the decreased and myself would love to shake the hand of the man that helped my friend during his last moments. Once again, I thank u again for your help and I look forward to meeting u soon. DANNY

Danny, you must be speaking about one of the other two or three people who were at the accident scene before I arrived. That person would be the one whose hand you want to shake.

john, your a kind hearted man. i know the other men that were there, and they told me nothing about what happen that day. i still mean what i said before, u were the last person to be with my friend. myself, other friends and family of Ken would like to meet u, and to hear what happen from u, even if u didn't see what happen. Danny

Danny, let me now how i can get in touch with you and we will see what we can arrange.

john tonight was day one of the wake for ken. sorry u missed it. u can e mail me at dlall6004@monroecollege.edu. i'll give u my cell phone # once i got an email address for u. thanks. Danny

John/Danny: Please let me know if you are able to arrange a meeting. I would love to meet you and I'm sure Ken's mom would like to as well.
nn0218@gmail.com

I was taking my friend to the airport after spending the weekend in NYC. We just missed the accident and saw the body lying in the middle of the road before they had covered it up. What shook us up the most and made us realize the severity of the accident was his shoe had flown off his foot, across the barrier and into our lane of traffic heading towards the airport. We wanted to get out of the car and retrieve the shoe but the traffic was coming so quickly behind us that it would have been too dangerous. It was a terrible sight to see and I haven't stopped thinking about the accidednt since I saw it. We talked about it the whole way to the airport and it's been on my mind ever since. My thoughts and prayers go out to Ken's family and friends during this most difficult time. ~ solymar

Hi - I am just an average person and business professional. I passed the accident site on my way to JFK Sunday evening. I have been searching since that evening and found nothing either on-line other than your posting. The only thing I noticed was some debris on the road, a motorcycle upright on the side of the road and the spot in the road where the victim must have been earlier. My heart sank as I passed knowing that someone had lost their live – a father (like me), a brother, son, friend, etc.. My oldest brother lost his life in a motorcycle accident over 18 years ago when he was 35, I am 44 today. My prayers go out to the man and his family and friends.

I am the exwife of Ken we share abeautiful 16 year old daughter together his only child Ashley. Although we had been apart ken was always there for us .He was kind ,funny, and sensative. He was my best friend .I would of done anything for him. He was very blessed to have had amother who truly was the best mom anyone could ask for .And employers that really were true friends and the friends and family that came together for his service was just another sign of how special and truly loved he was.My daughter and i will keep his memory alive and will always stay very close to her grandmother,for it is now her only real connection with her son.she has always been just like a mother to me to the pain and sorrow is unthinkable.Kenny i will always love you Happy Fathers day.I hope your in a better place know

Ken will really be missed

Ken will be missed