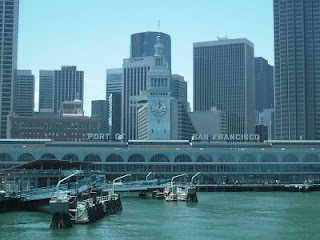 I am just back from San Francisco, having caught Saturday night’s red eye and landing at JFK around 7:00 AM yesterday. Apparently guest blogger Andy James was not able to post in my absence. Here is some random rambling upon my return.

It was good to get out of the city and to be away from the computer and the internet for a few days.

San Francisco offered a respite from all the rain New York City has been having and even provided bright sunny days and a minimum of fog.

The City by the Bay seemed to offer a few more shores and a lot more summits than the Big Apple.

Among the Redwoods was perhaps the perfect setting for A Service of Worship and Christian Marriage for a same sex couple legally married in California before the prejudicial Proposition B, especially since the Presbyterian Church (U.S.A.) has not seemed to be able to stand as tall as those redwoods. I think John Muir would have been happy and pleased.

There is nothing like a visit to City Lights Books to revive the poetic spirit.

Grace Cathedral is a thin place, which becomes especially apparent when the organist is rehearsing.

Do not try to walk around San Francisco on just one meal a day.

I did not see any fisherman at Fisherman’s Warf.

Seals in January at Jones Beach are more inspiring and smell far less than sea lions at Pier 39 in June.

Never order drinks at the bar and bring them to your table if you expect to be waited on at a restaurant.
Posted by John Edward Harris at 8:56 AM