Welcome to My Neighborhood: Sunday in the Park

If you ask almost anyone what park they associate with New York City they will undoubtedly answer “Central Park”. Yet there are numerous other smaller parks scattered throughout the five boroughs, including several in Ridgewood, all maintained by the New York City Department of Parks & Recreation. I was walking through the neighborhood Sunday afternoon, probably the fist sunny afternoon in two or three weeks, and noticed that there seemed to be more people than usual sitting in some of the neighborhood’s small parks. The two I passed were Ridgewood Veterans Triangle (pictured top row) and Clemens Triangle (pictured second row). 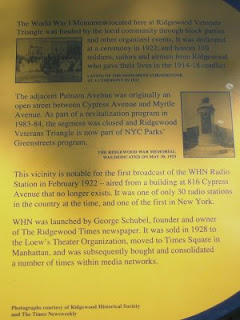 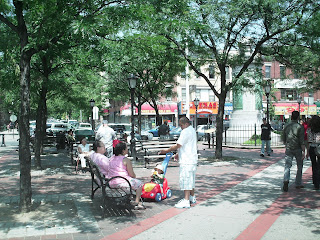 I have probably lost count of the numerous times I have walked past and through these parks without stopping to read the signage. The placards tell the story of the park as well as the people and history associated with it, including nearby buildings and businesses.

The unknown and untold stories are the life narratives of the people in the parks. Each person standing or sitting on a bench in the park is a living human document with hopes, fears, relationships, memories and expectations. Each and every one of them must have a story to tell. I wonder if they are native to Ridgewood or moved here from someplace else in New York, or like me from another state, or perhaps from another country. What have they been doing since they woke this morning? What are their plans for the rest of the day? 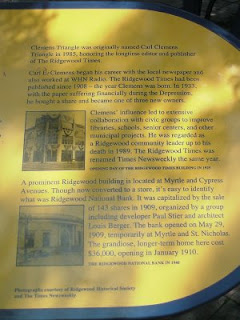 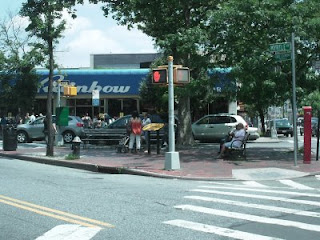 In parks, on sidewalks, while riding the subway, and while eating in a restaurants, New Yorkers encounter countless strangers that we never risk getting to know. Every once in a while a chance encounter might prompt us to exchange a friendly greeting, maybe even strike up a conversation about the weather, sports, or our dysfunctional state senate, but for the most part we remain anonymous neighbors, faces in the crowd.

As I meander up and down the sidewalks of Ridgewood I occasionally glimpse people I have seen before, either sitting on the same bench, frequenting the same business, or walking back and forth to work around the same time that I usually walk the dog. What if I stopped to not only say hello but to ask the person’s name and strike up a conversation? Would I be labeled weird? Crazy? A stalker? Strange? Arrested for solicitation or disturbing the peace?

In a small town almost everyone knows something about everyone else, but not in a large city. Yet in many ways Ridgewood, and I imagine many of the other neighborhoods in the outer boroughs, is like a small town surrounded by a large city. Why must we remain anonymous?
Posted by John Edward Harris at 3:56 PM