A Seminary Changes its Name 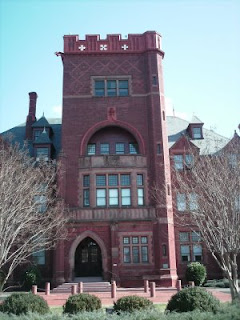 The Presbyterian Outlook (printed edition, June 29, 2009, page 9) has reported that “The board of directors of Union Theological Seminary and Presbyterian School of Christian Education has announced that it will change the school’s name to Union Presbyterian Seminary in the near future.” Seminary President Brian K. Blount announced the name change on May 19.

The name change means something to both my wife and me. My wife is a 1981 graduate of the Presbyterian School of Christian Education. She graduated after the Assemblies Training School changed its name to the Presbyterian School of Christian Education and before the 1983 Reunion of the UPCUSA and PCUS and the federation of UTS and PSCE. We were married between her first and second year at PSCE and I lived with her on the campus of PSCE during the 1980-1981 academic year. While living on campus I took one course. More recently I have been a participant in a Colloquy on Prayer sponsored by the of the Institute For Reformed Theology (IRT) at Union Theological Seminary and the Presbyterian School of Christian Education. So we both have a history with and a small investment in the institution even though we both earned our Master of Divinity degrees from other institutions.

Prior to the 1983 Reunion of the UPCUSA and the PCUS there was only one “Union Seminary”. Which one depended upon whether a person was north or south of the Mason Dixon Line and whether one was a Northern Presbyterian (UPCUSA) or Southern Presbyterian (PCUS).

In the former PCUS “Union” was more or less THE SEMINARY of the Church even though there were others. It was located in Richmond, Virginia and it enjoyed almost instant name recognition and a reputation for excellence. It also enjoyed a loyal following.

In the UPCUSA, however, especially north of the Mason Dixon Line and particularly in the northeast, “Union” was located in New York City and it too enjoyed almost instant name recognition and a reputation ofor excellence even though it was a non-denominational seminary.

In President’s Blount’s sermon reflecting on the new name, he acknowledges that “there are many excellent arguments why the word Presbyterian should not be part of this name change. The word looks to the past in a world whose future appears more and more likely to be non denominational. Presbyterian, as a brand, and as a church is, I fear, dying. Perhaps the cutbacks and enduring staff layoffs at Presbyterian central in Louisville is a metaphor for the entire church, shrinking away before our eyes.” When it seems that fewer people can describe Presbyterian than can spell Presbyterian, claiming the name is a gutsy, risky move.
Posted by John Edward Harris at 9:32 AM