The Daily Show with Jon Stewart: The Last Shall be First 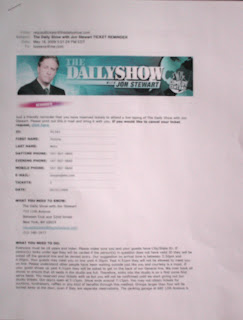 My wife secured two tickets to The Daily Show with Jon Stewart, one of our favorite shows. The tickets were free but not easy. There was a waiting period before any were available and a strict protocol related to when to show up and how to behave. Reservations and the expectation of guests were communicated via email (pictured at right).

We arrived outside the 733 Eleventh Ave Studio just south of 52nd Street in Manhattan by the prescribed 3:30 PM. There were already two lines, a line for general admission with reserved seats and a line for VIPs. We stepped up to the end of the line for the general admission, a line defined by movable tape barriers in front of the studio and along 11th Ave. As soon as we stepped up to the end of the line within the defined area a staffer closed the line behind us and directed others as they arrived to line up around the other corner on 52nd St.

We stood in line from 3:30 to 4:30. About 4:30, out of the blue, a total stranger came up to us and asked us if we would like VIP seating! She explained that she had VIP reservations for eight people but that only five were finally able to attend. We wondered what the catch was, and why she picked us, but welcomed the invitation and moved from the end of the Regular Admission line of about 100 people to near the end of the VIP line of about 50 people. And then we waited about another half hour.

It turned out that our total stranger was named Eboney. A relative worked in the entertainment industry, which is how she secured the VIP reservations. Her mother and some other family members and friends were with her. We asked Eboney why she picked us out of line to invite us into the VIP line. She said she picked us because we were at the end of the regular line.

Shortly after 5:00 PM the VIP line was handed homemade, numbers written in marker, laminated yellow tickets. My number was 37. My wife’s was 38. We then were invited inside into the lobby, passing under the entrance where above the doors was inscribed the words "Abandon News, All Ye Who Enter Here" and then we had bags and packs searched and walked through a metal detector. We were instructed not to eat, drink, chew gum, or take photographs, use a cell phone or recording device, not to get out of our seat once seated, to sit where were placed, to not talk unless invited to, but to laugh and cheer all we wanted. Once through the security check point we waited about another twenty minutes before were escorted into the studio and shown our seats. We sta third row back from the front and about ten yards form Joh.s desk, off of to tage right. Upbeat rock music, including cuts by Bruce Springsteen and Jesse Malin, played while we waited in our seats.

About ten minutes before Jon Stewart appeared the audience was warmed up by stand comedian Paul Mecurio. He was a quick wit sparing with the audience with one repartee after another. When Jon came to the stage he took a few questions from the audience, bantered with us a bit, and then sat at his desk and the taping started. I was impressed that Jon actually worked into the early part of the show information about his audience gleaned from his brief interaction with us.

The taping last thirty to forty minutes. There were three to four breaks between segments during which writers and techies would consult with Jon, revising the script up to the last minute. These taping breaks would become commercial break during telecast. A few of segments of the live video would eventually fall to the cutting floor in order to trim the show down to fit within its time allotment.

A little after 7:00 PM the show wrapped, the doors opened, and we were free to eat, drink, chew gum, make phone calls, take pictures, make recordings and go home. Later in the evening my wife and I watched the show at home on television.

All in all it was good experience: two Presbyterian clergy attending a live taping of a progressive Jewish comedian’s popular comedy news show and learning by experience an application of Matthew 19:30 and Mark 10:31 when, thanks to a total stranger named Eboney, we who were last became almost first.
Posted by John Edward Harris at 10:07 AM