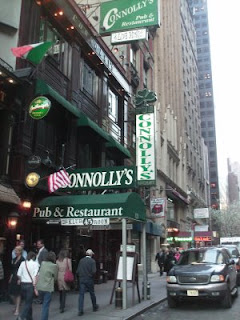 One of the pleasures I have experienced after moving to New York City is the opportunity to occasionally gather with other graduates of the National Outdoor Leadership School (NOLS) who live in New York City. NOLS is the premier teacher of outdoor skills and leadership, offering courses of ten days to a full semester in the world’s most spectacular wilderness classrooms. OK, that is pretty much verbatim taken from the NOLS Website, but I think it is true. So do most other NOLS alums.

Thanks to the organizing efforts of Tobey, Gint and Lori (pictured second right), NOLS alums in the NYC area gather about once every other month at one or another random local bar/restaurant for drinks, food and conversation. Our conversation might include politics, the economy, our work, and the local music/bar/restaurant scene, but will almost always incorporate our favorite, latest, or upcoming outdoor adventure.

Last Thursday, April 16, 2009 we gathered at Connolly’s Pub and Restaurant (pictured top right) at 121 West 45th St. between 6th Avenue and Broadway. Most of us drank Guinness. Food was varied. I enjoyed the garden salad followed by the walnut crusted salmon. Yum!

Gint and I talked about climbing in the Gunks. When Chris and I discovered that we had grown up near the same area of western Pennsylvania we talked about our boyhood adventures of climbing, caving (spelunking), white water rafting and backpacking along the Laurel Highlands and Chestnut Ridge of Western Pa. Lori, John and I talked about sea kayaking. 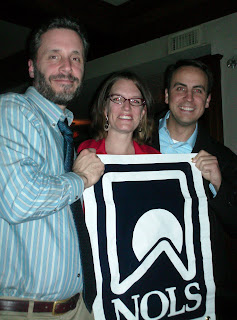 Tobey (far left in the picture center righjt) is perhaps the senior member of those who regularly gather. His first NOLS course was a Wind Rivers Wilderness Course all the way back in 1976. Thirty years later he returned to NOLS for the Instructors Course. He works as a Civil Engineer with the Metropolitan Transit Authority but occasionally returns to NOLS to lead courses.

Lori’s NOLS course was in Kenya in 1999. She (center in the picture center right) works with the Asthma Free School Zone, a non-profit (501C3).

Gint (far right in the picture center right) is a newbie among the alums. His NOLS course was a 2007 Wind River Backpacking Course. He works at a Manhattan Brokerage in Technical Sales.

Having taken three NOLS courses, Elizabeth is perhaps a NOLS course collector. In 1999 she took a Baja Sea Kayaking Course. She was on a Patagonia course in 2004 and a New Zealand Backpacking Course in 2006. It was Elizabeth who introduced Gint to NOLS. She is currently unemployed and looking to serve in Higher Education.

Mac took her NOLS course in 2006, the Pacific North West Trip Leader Course, and is the Founder and Executive Director of Concrete Safaris.

Chris is an entrepreneur developing interactive software for CE Interactive. His NOLS course was a 1982 Backpacking Course in the Wind Rivers.

John's NOLS course was a 1995 Brooks Range River Trip. He is a Professor with his own textbook and an Entertainment Technology Site on the web.
A few others came and went during the evening but I either did not know them as well or did not have the time to talk with them. My wife Vicki, not a NOLS Alum but an avid kayaker with other varied outdoor experience, joined our group near the end of the evening.
I think there exists among NOLS alums a bond forged by a shared base of knowledge and experience. I know that whenever I have climbed, backpacked or kayaked w 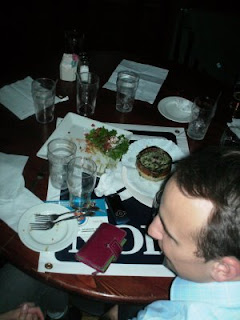 ith a NOLS alum I have always felt more comfortable and at ease with that person and their skills and knowledge than perhaps others on the same trip who are not NOLS alums. While others may also be knowledgeable, skilled and trustworthy, they do not share the NOLS experience. OK, perhaps what others say about NOLS alums is true. We are elitist.

As for me? My first NOLS course was an Outdoor Educators Course in the Wind River Range of Wyoming in August 1979. In 2005 I took a Leave No Trace Master Educator Course in Shenandoah National Park co-sponsored by NOLS and the National Park Service. One of our two instructors was long-time and legendary NOLS Instructor Haven Holsapple. Our other instructor was John Buchheit, National Park Service Backcountry Ranger in Shenandoah National Park. One of the other eight participants was NOLS Instructor Chris North, who was taking the course to receive LNT Master Educator Certification.

In spite of NOLS alum's commitment to Leave No Trace backcountry ethics; we may not always practice the same ethics when we are out on the town. Take for example the mess we created on the NOLS Banner (Pictured bottom right. Folks in Lander, don’t look at this!). Even though our table looked a lot cleaner before we left, the astute observor could still tell that we had been there.
Posted by John Edward Harris at 11:40 AM