The Sights of the Falklands and the Sounds of Germany in Brooklyn, NY 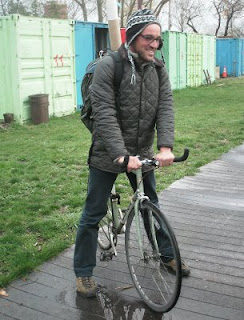 On July 17, 2007, Marcus Demuth finished paddling a sea kayak around Ireland. On January 26, 2009, he successfully completed a circumnavigation of the Falkland Islands by kayak. In the wet and rainy early evening of Saturday, April 11, 2009 he successfully peddled his bike (photo top right) from his home in Brooklyn to the Sebago Canoe Club on Brooklyn’s Paerdegat Basin to talk about and present a slide show about his recent circumnavigation of the Falklands.

Saturday evening was my first opportunity to meet Marcus. A native of Germany who recently moved to New York City, his German accent betrays his soft spoken, polite, mild manner which can disarm any stranger but hints of the deep reserve of inner and physical strength that has been more than once tested on the open sea.

The Sebago Canoe Club is not the most high tech sort of place to present an expedition travelogue. The laptop with attached projector seemed just a little out of place next to the double 55-gallon drum wood stove with a fire burning inside to take the chill off the air. The white plastic tablecloth tacked to the wall as a make-shift projection screen seemed more appropriate. One or more of the four nautical charts of th 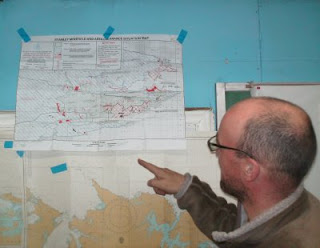 e Falklands that Marcus had taped to the wall with blue painter’s masking tape would occasionally fall down during his presentation. The plastic table-cloth screen also started to fall but was quickly re-tacked. Concessions consisting of tortilla chips, cheese, crackers, wine and local brews were free.

I thought the most startling visual aid was a map of the Falklands detailing mine fields left over from the Falkland’s War fought in 1982 between Argentina and the United Kingdom. (photo bottom right, not a photo of the war but a photo of the map). The slides, consisting mostly of scenes featuring penguins, treeless landscapes and vast ocean reminded me of scenes from the Outer Hebrides of Scotland, except there are no penguins in Scotland.

Seventeen people and two dogs attended the presentation, including some good folk visiting Sebago for the first time. Of the sixteen other people in attendance (not counting myself and Marcus) I had paddled with six of them.

The folksy, laid back presentation and slide show of an expedition reminded me of a similar experience more than thirty years ago. It was a seasonable summer evening. Several climbers were sitting in the dead-end road outside The Gendarme climbing shop at Seneca Rocks, West Virginia. After a day of climbing under the hot sun about two dozen climbers were drinking ice cold beer and watching an open-air slide show about an expedition to the Himalayas. It was an enjoyable evening spent with likeminded folk who shared a passion for climbing. Similarly, Saturday night’ s gathering at the Sebago clubhouse was an enjoyable evening spent with likeminded folk who share a passion for sea kayaking. These two experiences, one a summit slideshow and the other a shore slideshow are now inexorably wed in my memory as well as in this blog post.
Posted by John Edward Harris at 8:16 AM

I wish I had been there. I think I would have enjoyed the presentation. I have been following Daniel Fox and The Wild Image project. Daniel is kayacking in Argentina. He is a former Central Park Zoo volunteer. Check it out. http://www.kontain.com/thewildimageproject

As a first time user of thewildimage I found the environment a little difficult to navigate, but there are some stunning photos and video.