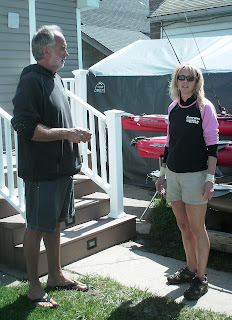 Last Friday, April 17, 2009, I joined my Sebago Canoe Club paddling pals Tony and Walter for a day on the water starting at Empire Kayaks. Empire is located on the waterfront at in Island Park, NY along Nassau County’s South Shore, just west of Jones Beach. It was the first time I had paddled since kayaking at Jones Beach on February 28, and the first time I had been to Empire Kayaks.

Empire was started and for the last eleven years has been owned and managed by Gabrielle and Michael Fehling (pictured top right). It was a pleasure meeting them, talking with them and getting to know them. Their shop might be small (all the boats are kept outside) but it is packed with just about every conceivable kayaking accessory imaginable. What one can’t readily see is the kayaking knowledge and experience that both Michael and Gabriellel possess. Paddling is their passion. To top it off, their personal vehicle, a Honda Element with Yakima roof racks for three kayaks, is almost the splitting image of the Honda Element my wife and I have, so they can't be all bad. Stop by Gabrielle and Michael’s shop some time and tell them you read about them on Summit to Shore. Mentioning my name will not get you a discount but it will get me some exposure.

Tony, Walter and I put in just a little around noon. Four hours and 7.8 m 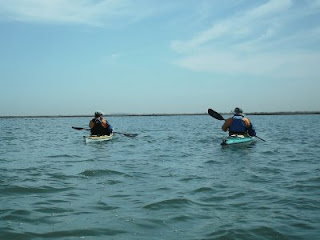 iles later we took out after an enjoyable paddle though open bay and marshland. Once again I paddled the Necky Chatam 16 that belongs to the Sebago Canoe Club that I had paddled before and that is currently my favorite boat. Walter and Tony paddled boats they own (pictured bottom right). With a water temperature around 50 and air temperature around 56, all three of us wore dry suits with minimal insulation underneath. The water and wind were generally calm but the wind picked up a little near the end of our trip. Waterfowl were numerous, but not being a birder, I cannot really report what we saw.

Presbyterians call the church owned hosing clergy live in a “Manse” but I felt right at home, and not at all out of my element, when we were paddling through a channel bisecting “Parsonage Island.” Can I claim I was working at home when I was actually paddling?
Posted by John Edward Harris at 8:15 PM