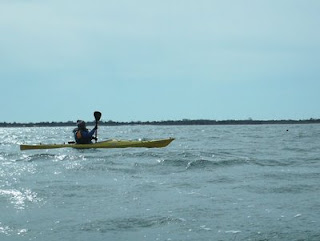 For the third time this year and the second Saturday in a row, members of the Sebago Canoe Club trekked to Jones Beach with the hope and expectation of seeing harbor seals. The trip was organized by Steve Heinzerlin. Tagging along were George Sullivan, Vicki Moss and John Harris.

Conditions were again windy but because the wind was blowing out of the north rather than the west (as it was the previous week) there was less fetch and so the water was not quite as choppy. Last week the trip circumnavigated the islands clockwise. On this trip we circumnavigated counter-clockwise.

Having crossed the channel and paddled into the marsh islands, as we approached an island I could see from a distance that something was on the shore. At first I thought it was sand or birds but it turned out to be seals, lots of seals. I would estimate between two and three dozen seals were sunning themselves. As we approached they started to climb into the water and disperse. Eventually the four of us found ourselves in their midst as they swam aroud us.

Afterward, trip organizer Steve Heinzerling wrote: “Today George Sullivan, John Harris, Vicki and myself went out to Jones Beach for a paddle with the seals. I was a little afraid that I may have missed them, and they'd already moved on to other waters. About twenty minutes out we spotted an island that was covered with seals. We counted at least 30 seals. We approached cautiously not to scare them in the water. After one went in most of them followed. Soon they were popping up all around us. It was a great experience and a very exhilarating paddle. When we returned to the cars I vowed that I'd come back and do this paddle every year. It's truly an awesome experience. “

For the record, we put in around 10:10 AM and took out two hours later, paddling 3 miles. Our average speed was reduced because once we encountered the seals we tended to paddle in place so that we could watch them. I have created a short slide show from the trip using original photgraphs.
Posted by John Edward Harris at 6:18 PM

Wow! Totally cool! We loved the seal pictures and had no idea there were so many seals in these waters.

Back In January we saw, at most, perhaps a dozen seals. The previous week we saw only two or three. But this week, dozens! It is my understanding that the seals summer up north in arctic waters but come south as their feed stock migrates to the warmer (relatively speaking) waters around Long Island.

BTW, during summer months Sebago offers free public paddles on Wednesday evenings and Saturday mornings. You will have to come to the club sometime and bring your children for a few hours on Jamaica Bay. You won't see any seals, but you might catch some rays.