Meet My New Friends (Sort Of) 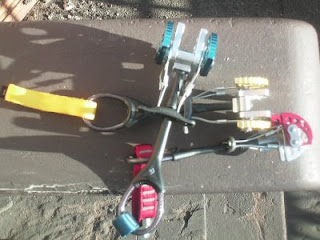 It seems that I have been blogging a lot more about shores than summits. With the advent of spring, however, my thoughts are turning more and more to climbing in the Gunks as well as paddling on Jamaica Bay with the Sebago Canoe Club. Hoping to soon do some climbing, I recently purchased some Black Diamond Camelots, mechanical spring-load camming devices which come in a variety of sizes to fit a variety of crack widths. They remind me of “Friends”.

The first spring-load camming devices used for rock climbing were known as “Friends”. They were invented by Yosemite climber Ray Jardine in the late 1970s and intended to protect the valley’s smooth-sided cracks.

I started top roping at local crags in West Virginia and western Pennsylvania in the fall of 1974 and started leading at Seneca Rocks, WV in the fall of 1976. This was well after the start of the clean climbing movement. While using my partner's rack I led using primarily hexes and stoppers. I have never carried a rock hammer nor driven a piton though I have clipped into old ones for questionable pro. 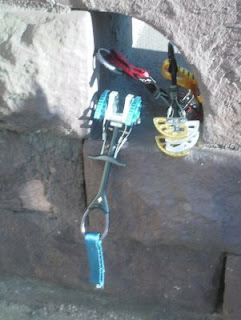 Once I got bitten by the leading bug I purchased my own rack, filling it out in 1978 with Chouinard (the predecessor to Black Diamond) stoppers and hexes and a few other odds and ends. "Friends" had not yet hit the market so there was not a single one on my rack and I was leading on the vertical cracks of Seneca without them.

By the time “Friends” were invented and on the market I already had a full rack and could not justify the cost of adding what I considered unessential gear to my rack. I also thought their “mechanical” design detracted from the more pure passive pro. Hexes and stoppers seemed non-mechanical evolutionary developments from slung machine nuts and chock stones and thus more natural. “Friends” seemed too artificial and contrived, so from an ethical as well as financial standpoint I continued to climb, as occasional as it was, without any “Friends”.

Living with the decision not to add “Friends” to my rack, I continued to climb on and off at Seneca and the New River Gorge using only hexes and stoppers. In the summer of 2007 I moved to New York City and in the fall of 2008 started climbing in the Gunks. While leading 5.4 through 5.6 pitches in the Gunks I would still place only stoppers and hexes for pro but my young occasional climbing partner Bill used cams. After following and cleaning his leads I began to see how cams could provide a safety advantage and speed placing pro in the horizontal cracks of the Gunks, horizontal cracks where stoppers and hexes might not work.

I recently broke down and acquired some cams. A new generation of “Friends” is marketed by Wild Country but I opted for Black Diamond Camalots. I am partial to Black Diamond, the successor to Chouinard. When I acquired my first rack thirty years ago most of the hexes and stoppers were Chouinard and I had recently replaced them with Black Diamonds. I considered other cams but decided on Black Diamond Camalots and recently purchased three for my rack. Eventually I will probably be purchasing more.

Considering that a set of eleven Black Diamond stoppers can be purchased for around $85 but a single Camalot costs around $65, economics is still an issue. On the other hand, a Camalot can fit a wider range of cracks than any single stopper.

As the days grow longer and the weather warms, I hope to take my new Camalots (new “Friends” sort of) to the Gunks, lead a few pitches, and come home with old Camalots (old “Friends” sort of). It has taken me thirty years to make the acquaintance of these new “Friends” but hopefully we will become old "Friends" much more quickly.

On a side not, I am presently up to 99 “Friends” on face book and anxiously wonder who will be my 100th friends. To echo Mr. Rogers, “Won’t you be my friend?”
Posted by John Edward Harris at 9:27 AM