Snow in the City 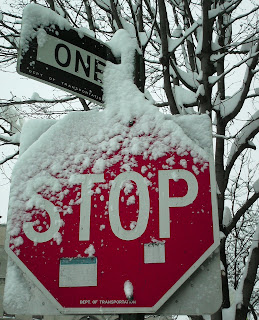 Snow has been blowing sideways down the street in front of our home and has been accumulating on the streets and sidewalks since last night. I have been out with the shovel twice, spreading ice melt both times. I am beginning to wonder if it will ever stop snowing. I guess there is only one way to find out: to wait and see.

My wife and I moved to New York City (the Queens neighborhood of Ridgewood) during the summer of 2007. The following winter seemed pretty mild by our West Virginia mountain standards and even locals were saying it was a calm winter. Even though we have seen a little more cold and snow this winter, until last night I thought the worst of winter was behind us. After all, it reached 60 degrees on Friday and 55 degrees on Saturday. I guess Punxsutawney Phil was right. There really were six more weeks of winter on the way. The forecast was for a winter storm dumping eight to fourteen inches in a 24 hour period. I measured nine inches of snow on our back porch where the wind did not blow it away or drift it higher. It was probably ten inches deep when fresh but has had some time to settle. The snow that fell over night and the forecast for more snow today was enough for the City of New York to cancel school for the first time in five years!

This morning, while walking our dog Hermes, I took a few photos to give others an idea of what the world’s greatest city looks like under a blanket of snow. My Sebago Canoe Club paddling body and fellow NOLS Alum John H. has a great time lapse video of the snow falling over night that you might want to view.
Posted by John Edward Harris at 2:27 PM