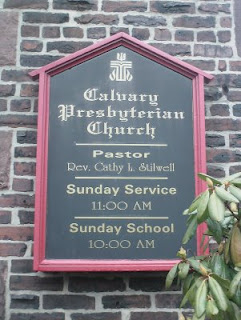 The Presbytery of New York City met this past Saturday, March 28, 2009 at the Calvary Presbyterian Church on Staten Island. About one hundred voting Ministers and Elders attended the meeting as well as many other nonvoting observers.

For me the two highlights of the meeting were opening worship and the Report of the Task Force for the Ghanaian Fellowship. The low point was the Report on Standing Rules and Overtures when we became bogged down in process and more concerned about time rather than debating the substance of the many Proposed Amendments to the Constitution of the Presbyterian Church (U.S.A.) and Proposed Ecumenical Statements and giving them the time they deserved. At least we passed 08-B 76-25!

Words alone, however, can never fully describe a meeting of any presbytery because before they are debates and votes, presbyteries are people. So here is a slideshow from the meeting. Most of the photos are of people, some are not.
Posted by John Edward Harris at 6:25 PM