Of Lambs and Lions 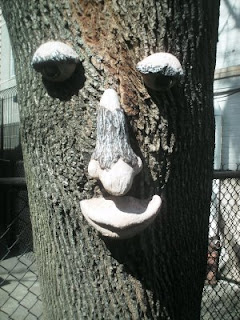 When I was a young child I learned an old wives’ tale/superstition that if March comes in like a lion, then it will go out like a lamb, or vice versa. I have seen many March’s come and go but do not remember them all, so I cannot comment of the past reliability of the aphorism. Statistically, there is at least a 50-50 chance that the old wives’ tale/superstition will be true any given year. Given long term weather patterns, the saying might be true even more often than half the time. It sure seems true this year, at least for New York City.

I do not remember what last March 1st was like, but on March 2nd winter descended on the Big Apple with a vengeance, dumping several inches of snow in the city.

Today is a beautiful spring day in the world’s greatest city. The air is crisp, the sky clear blue with just a few clouds, and the slight chill in the air hints of warmer weather to come. It is such a nice day that even my buddy, the tree in the back yard, is smiling. It seems that some old wives were right this year. Today has been a lamb of a day.

On the other hand there is Fargo, North Dakota. Although water levels in the Red River have fallen more than two feet from their record highs of a few days ago, on its last day March in Fargo is like a wild lion, roaring blowing and drifting snow nearing blizzard like conditions. I have no idea how March came into Fargo but I am sure Fargo’s citizens are finding no comfort in superstitions or old wives’ tales.
Posted by John Edward Harris at 3:24 PM

I have not thought of a name for our tree buddy in the back yeard. Any suggestions?