A Tylosaurus Comes To Worship 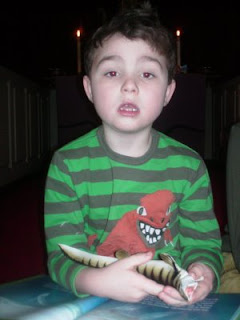 My friend Shane is one of the youngest worshippers at North Church Queens. He is really in to dinosaurs. Last Sunday he was not only wearing a shirt bearing a dinosaur picture but was also wearing dinosaur boots. When he, Chelsea and Lisa came to the front of the sanctuary for a special time with me, their Pastor, Shane brought a dinosaur picture story book with him. A week earlier he had brought a plastic Tylosaurus with him to worship. After worship he left it on the table when leaving the after worship fellowship time. I returned it to him last Sunday.

One never knows who or what might show up at a worship service. Interesting people with interesting stories to tell occasionally venture into the sanctuary. I have seen stuffed animals and baby dolls of various sorts, including Cabbage Patch Kids complete with names and birth certificates. I have seen Transformers and Hot Wheels. Shane’s Tylosaurius was, however, the first extinct carnivore I can remember attending worship. 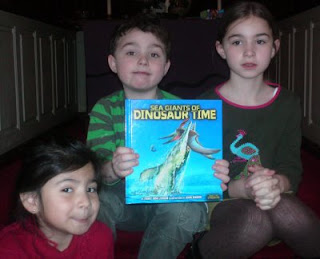 Maybe it was not a coincidence that Shane brought his plastic Tylosaurus with him to worship just a few Sunday’s after evolution weekend. A few years ago I had signed on to an Open Letter Concerning Religion and Science and on Sunday, February 15, 2009 had preached a sermon to coincide with Evolution Weekend. Three weeks later Shane brought his dinosaur friend with him to worship.

I am not sure that Shane and his Tylosaurius would have been welcomed by a pastor that shunned science and embraced “so called” creation science. I welcomed this budding paleontologist and his plastic dinosaur, however, because I believe in truth and find the theory of evolution and a historical and critical reading and interpretation of Scripture completely compatible.
Posted by John Edward Harris at 10:18 PM