The Decline and Fall of Christian America? 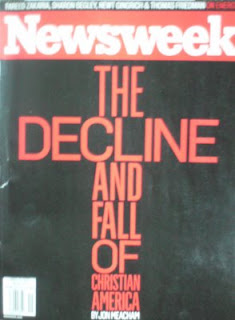 I am not a subscriber or usual reader of Newsweek, but when I heard a blurb on NPR about the April 13, 2009 cover story, I popped into Barnes & Noble and bought a copy. “The Decline and Fall of Christian America”? So what’s new? Oh, that’s right. This is the Newsweek issue hitting the newsstands just before Easter. It is the one of two issues of Newsweek a year with a cover story about religion, the other issue being the one just before Christmas. Does that mean Newsweek shares a profile with “C&E” Christians? You know, the ones that show up for worship only at Christmas and Easter.

“The End of Christian America” by Jon Meacham quotes E. Albert Mohler Jr.—president of the Southern Baptist Theological Seminary—as writing in response to the news that “the Northeast emerged in 2008 as the new stronghold of the religiously unidentified” “The so called Judeo-Christian consensus of the last millennium has given way to a post-modern, post-Christian, post-Western cultural crisis which threatens the very heart of our culture.”

Mainline Christians have been aware for years of the trends cited. We have been bantering about the terms “post-modern, post-Christian” and “post-Western” for awhile now. Some of us even think that the end of the Constantinian era and end of Christian empire is a good thing for the faith. After all, Jesus was a counter-cultural, in your face, speaking truth to power sort of guy rather than an establishment type.

Consider this, however. George Bush, the born-again conservative and the religious right activists that put him into office probably did more with their policies to hasten the decline of Christianity in the West than any Scientist, Philosopher or decision by the Supreme Court. On the other hand, even before he was elected, the campaign of Barack Obama had people once again talking about, and seriously re-considering and rediscovering the theology of H. Richard Niebuhr and talking about ethics.

Maybe Christian America is not as Christian as it once was. Then again, maybe America was never as Christian as we have been led to believe. Maybe America is growing up, embracing a more critical faith posture and asking questions about things ultimate that a church grown fat and lazy from its baby-boom growth spurt is unprepared and unwilling to address and answer.
Posted by John Edward Harris at 5:42 PM

Last month , for the first time in 40 years , I attended an evangelical Christian church to attend the funeral of a neighbor.
Boy, was I in for a shock.
The church was laid out like a theater. There was a rock band, a multimedia setup with two cameras, even a coffee shop and a book store.
After the service, I commented to my wife that if Jesus Christ were to set foot in the chuch today... in tattered robes and leather sandals...he might feel a bit uncomfortable in the ultra plush, ultra modern setting.
Especially with people sleeping in their cars and on the streets in American...not to mention those without food in 3rd world countries.
I thought Christianity was about helping your fellow man. Apparently it's more about "getting saved"

Actually, Hamster, it's about both. We are called first to repentance, forgiveness and salvation, and that SHOULD result in our wanting to become more 'Christ-like' (aka Christian) in our attitudes towards our fellow Man, and in following His commands, which include evangelisation and caring for our neighbors. In other words, it is a package deal. One is supposed to lead to and include the other.

Sadly, all too often, it does not.