Has San Francisco Lost Its Heart? 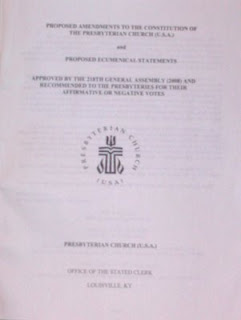 Tony Bennett may have left his heart in San Francisco, but I wondering if it is still there.

I was on the campus of UnionPSCE in Richmond Virginia Wednesday morning when I learned that San Francisco Presbytery had become the first presbytery to flip-flop from having historically supported the full inclusion of all God’s children in the leadership of the church to rejecting that possibility by failing to approve 08-B with a 167-177 vote. A member of Redwoods Presbytery, the presbytery just to the north of San Francisco Presbytery, was sitting nearby and was not a bit surprised by the vote, saying that SFP has always been a divided Presbytery.

In an earlier version of this post I had credited The GA Junkie for some astute observations regarding the possible symbolism of this flip-flop by San Francisco Presbytery but the credit really belongs to John Shuck at Shuck and Jive. To paraphrase and add to John, San Franscisco Presbytery is . . .

where PCUSA Moderator Bruce Reyes-Chow is a minister member;

where Out Lesbian and Minister Coordinator for That All May Freely Serve Lisa Larges is a candidate;

where The Covenant Network of Presbyterians maintains its office and some of its staff; and

where there areapparently numerous bath houses editor emeritus of The Layman Parker T. Williamson believes will erupt in jubilation if the PC(USA) approves 08-B.

Why the flip flop in San Francisco Presbytery? Progressive turnout or lack thereof. In 2001 there were 186 votes against 01-A, nine more than this year. But in 2001 there 216 votes FOR 01-A, 49 more votes than this year! Where have the progressives gone? Could not eleven more have dragged themselves to Tuesday’s meeting? Every vote does indeed count.
Posted by John Edward Harris at 10:50 PM

Email ThisBlogThis!Share to TwitterShare to FacebookShare to Pinterest
Labels: 08-B, Covenant Network, G-6.0106b, LGBTQ, San Francisco, That All May Freely Serve

Thanks for the link to the GA Junkie. But to give credit where credit is due, in my post I quoted the every quotable John Shuck for the litany of credits for San Francisco.

Jack Rogers is a minister member of the Presbytery of San Gabriel.

The post originally incorrectly noted that San Francisco Presbytery is "where former PC(USA) Moderator and author of Jesus, the Bible, and Homosexuality: Explode the Myths, Heal the Church Jack Rogers is a minister" but as HeySonnie correctly noted, Rogers is a minister member of San Gabriel Presbyery, not San Francisco Presbytery. I understand that blogging protocal is for me to strike through that information but I can not figure how to do it, so I have removed the referance. Thanks HeySonnie.

I am sorry I missed the link to Shuck and Jive, so here it is http://www.shuckandjive.org/
John is such a prolific writer. His post came while I was away from a computer and I had not yet backtracked to his post about the San Francisco vote. Sorry John. Thanks beingsynidical for pointing out the link.