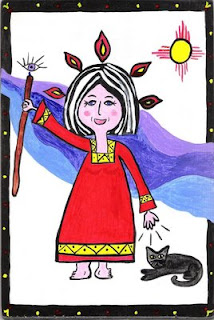 You may have noticed that in the past few days I have added a few more blogs to my blog roll. One of the blogs I have added is Voices of Sophia.

In the New Revised Standard Version translation of the Bible, Proverbs 1:20 reads “Wisdom cries out in the street; in the squares she raises her voice.” This verse is an example of one of the many places in the Jewish and Christian Scriptures where wisdom is personified as a female. In the original Hebrew the word translated into English as “wisdom” is chockmah, a feminine noun. When the Hebrew Scriptures were translated into Greek, chockmah was translated as sophia, also a femine noun.

Voices of Sophia (VOS) was organized in 1995 in response to the backlash against the 1993 feminist theological event known as “Re-Imagining.” When a bunch of evangelical conservative dead white Layman found their heretofore privileged positions of patriarchal power threatened and challenged by a bunch of uppity and vocal feminist theologians they went ballistic and forced the ouster of some female staff in the national offices of the Presbyterian Church (U.S.A.). VOS was formed as a response to the response, to support feminists being attacked by the right, and to continue and broaden the discussion and community begun at Re-Imagining. 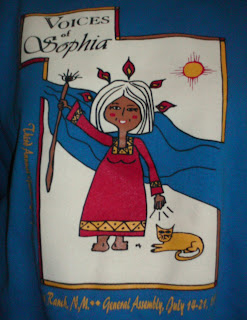 In July 1996 my wife learned how to make Southwestern style Santos in a workshop at Ghost Ranch in Abiquiu, New Meixico. Ghost Ranch is one of the national conference centers of the Presbyterian Church (U.S.A.). One of her early creation was the Santos pictured top right, which she titled Sophia. VOS later adopted the design to feature on t-shirts and sweatshirts (pictured bottom right) promoting one of their conferences, and the design can still occasionally be seen around the PC(USA) General Assembly.

After fifteen years of continuous scholarship and activism, Voices of Sophia can now be heard in the blogosphere. And in some very exciting news you can read about in their blog, VOS and The Witherspoon Society are joining together in a holy union that promises to strengthen and expand not only feminist voices but all voices calling for peace, justice, the care of creation, and the inclusion of all God’s Children in the leadership of the Church.
Posted by John Edward Harris at 9:26 AM