Can a Prince Reclaim His Throne? 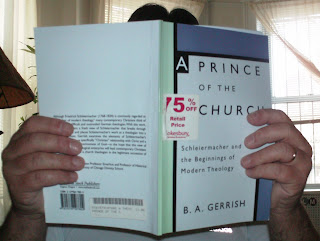 I was introduced to Neo-Orthodoxy in college in the late seventies. That introduction included helpings of Barth and the Niebuhr brothers along with side servings of Buber and Bonheoffer. My immersion in Barthian Neo-Orthodoxy continued at Princeton Seminary where by choice I also consumed heaping portions of Calvin and Tillich. Half of one of my Pittsburg Seminary Doctor of Ministry seminars was devoted to Calvin and I read in Barth’s Dogmatics while I was working on my D. Min. project and paper. Thus I have numerous volumes written by these theologians on my book shelf, but only one book by Schleiermacher, his Speeches to its Cultured Despisers.

While I have been exposed to other theological viewpoints throughout my education and have previously read a little Schleiermacher, I have recently rediscovered him. While on the campus of UnionPSCE for the last Colloquy on Prayer, I wandered into the Cokesbury Campus Bookstore and picked up a 75% off the retail price Wipf and Stock reprint of B.A. Gerrish’s A Prince of the Church: Schleiermacher and the Beginning’s of Modern Theology. It has been by far the most concise and clear overview of Schleiermacher that I have read. It has even prompted me to begin thinking of myself as a “Liberal Evangelical” and to think that it is about time that Progressive (i.e. Liberal) Christians re-claim the “Evangelical” label co-opted and held captive by conservatives.

It can be argued that Barth and neo-orthodoxy pounded the last nail in the coffin of Schleiermacher and 19th century Liberal Theology. But it can now also be argued that neo-orthodoxy no longer enjoys the theological monopoly it once did. Various Liberation Theologies, Process Theology, and other theologies have chipped away at the neo-orthodox consensus to the point where neo-orthodoxy is just one theology among many. With the end of the neo-orthodox consensus perhaps it is time to dust off the throne, remove the nails from Schleiermacher’s coffin, and see if there is still some theological life left in this one time prince of the church. Resurrections, after all, have been claimed to happen.
Posted by John Edward Harris at 9:16 AM