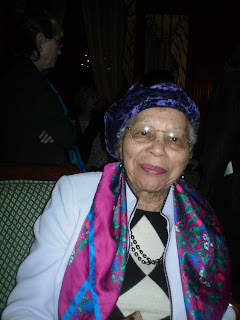 Presbyterians generally do not have saints, at least not the kind of Saints Roman Catholics have, and certainly not living saints. If Presbyterian did have living saints, however, one of them would be Thelma Adair (pictured right).

During my freshman year of college, which was also Dr. Adair’s Moderatorial year, Thelma Adair visited the small Presbyterian Church related college where I was a student and I was able to meet her. She was the first Presbyterian Moderator I ever met and will probably remember her for as long as I live.

I was able to meet Thelma Adair again thus past Tuesday evening at the Presbyterian Senior Services Maggie Kuhn Award reception. It was one of the highlights of my evening. As I was talking with her I felt like I was living in an historical moment.

Dr. Adair is an ordained elder in the Mount Morris Ascension Presbyterian Church of New York City. She became the first black woman elected Moderator of a Presbyterian General Assembly when she was elected Moderator of the 188th Assembly in 1976. The Moderator of the General Assembly is the highest elected office of the church. She has served as chair, Presbyterian Senior Services and as advisor, Church Women United, National Board. In addition, Dr. Adair has been a member of both the advisory council of the National Council of Churches and the Harlem Hospital Community Advisory Board. She is also the only living Presbyterian Moderator from New York City.
Posted by John Edward Harris at 9:54 PM

If Presbyterians has saints like Roman Catholics, Dr. Adair would get my vote for saithood.
Lloyd

Yes, Ms. Adair has lived a live of service. I am looking for interviews online. I am lot finding a lot of interviews from major news outlets. This is definitely an issue that needs to be addressed.