Welcome to My Neighborhood: The Morning Walk (Part 2 - 68th Avenue) 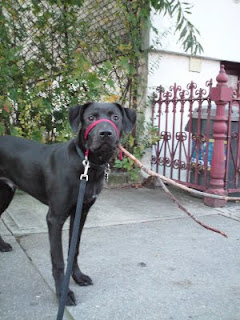 Turning right off Forest Avenue onto 68th Avenue, Myrrhlyn and I walk east. With his teeth Myrrhlyn grabs a forked stick off the sidewalk (photo top right), chewing sticks being another of his passions. With stick in his mouth he struts down the sidewalk as if he just won the Best of Show at the Westminster Kennel Club Dog Show, his new stick his trophy. After a few proud struts, however, the leash tangles in the fork of this wooden trophy and Myrrhlyn uncharacteristically abandons his prize after only a few more steps. This will not be the only stick Myrrhlyn retrieves this morning without anyone throwing it.

The sidewalk along 68th Avenue is quieter and cleaner than Myrtle Avenue. 68th is a one way Avenue, almost entirely residential, and we are walking against traffic, so no cars or busses will be sneaking up from behind. The only time excessive trash litters this route is after a breezy garbage day when the wind gathers debris and deposits it at will. Maybe that is why this part of our morning walk is my favorite. It is usually quiet and clean.

Continuing our stroll I begin hearing sounds of the “M,” a block or two away on our left. This is the same subway line that often carries me into Manhattan and brings me back home. Sometimes I have to transfer to the “J” to make it all the way into the city and ba 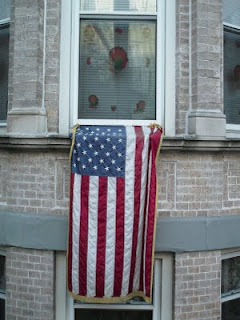 ck again. During rush hour, however, the “M” runs the whole way. I hardly ever ride the “M” between the Forest Avenue Station and its eastern terminus at Metropolitan Avenue.

The subway's volume and pitch rises as it approaches, and then, according to the laws of physics, lowers and fades as it passes. Without being able to see the elevated tracks I do not know if the train is headed east, toward Manhattan, or west, toward Metropolitan. In case there was any doubt, the sound of the subway reminds me that I live and walk in an urban environment.

An American flag hangs from the outside of a window (photo second from top right), as I think it usually does, its hem tucked between the bottom of the sash and the windowsill. Today, though, I notice that the upper window is decorated with vinyl peel and stick turkeys for Thanksgiving, the sort of holiday decorations that you might buy at Michel’s or K-Mart. More stars and stripes hang suspended from a pole a few doors down (third photo from top right). Many of the residents along 68th Avenue seem to take great pride in the neighborhood, keeping it clean, proclaiming their patriotism, and observing holidays with various decorations. 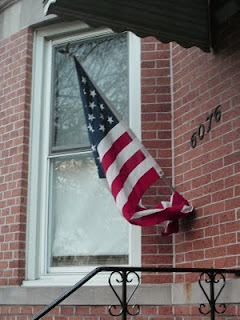 Even though most of the homes were originally identical row houses, they have been around long enough for the residents to undertake renovations. I could probably find and photograph enough unique doors on the front of these homes, doors of various woods adorned with brass ornamentation and cut glass inserts, to publish a door poster or door calendar, the sort that celebrate cities and historic neighborhoods. As I walk past these doors I wonder who lives on the other side and what lives they live. What language do they speak? What faith, if any, do they practice?

Occasionally I will see a parent before work delivering a son or daughter to child care or picking one up to take to school. Sometimes I will see older residents sweeping their sidewalk or putting out trash. But there are no familiar faces on this street, no one I remember seeing on a regular basis. Cities can be so anonymous.

When we reach where 68th Avenue dead ends at Fresh Pond Road we are at the halfway point of our walk. The municipal trash can at the corner offers me the first opportunity since we left home to dispose of any flourescent orange doggie bags I used along the way. I do because I did because Myrrhlyn did doo-doo as we walked along 68th Avenue. Now he feels better, and so do I.
Posted by John Edward Harris at 6:21 PM