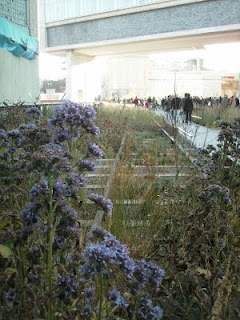 Ever since it opened to the public on June 9, 2009, Vicki and I have wanted to visit and walk the High Line. We thought we would achieve our goal the evening of the fourth of July and perhaps watch the fireworks from there, but the park was closed that evening. We finally walked along this elevated pedestrian parkway not long ago. We were not disappointed.

Imagine walking along an open air and elevated pedestrian walkway two or three or even more stories above the streets of Manhattan’s West Side, with outstanding views of the Hudson River and New Jersey to the west and the Empire State Building to the northeast, all the while surrounded by wildflowers and the remains of an old railroad, and never have to stop for traffic when crossing a street. If you would rather watch the traffic below you instead of walking, there is an amphitheater like area with sitting benches overlooking Tenth Avenue. Other benches line the pathway, some constructed on what appear to be old small railroad wheels, which ride on old tracks left behind from when the High Line was a working rail line.

I was not disappointed with the High Line, until I reached its northern terminus and had to descend back down to street level. Hopefully, someday soon, more sections will open to the public.

As we strolled along this elevated urban parkway I often stopped to take pictures. I was not the only one carrying and using a camera. It appeared to me that several people had come to the High Line with the express purpose of locating picturesque scenes. Some of the people we saw while walking we interesting as well.
Posted by John Edward Harris at 7:49 PM