Out of the Swamp to Madison Avenue 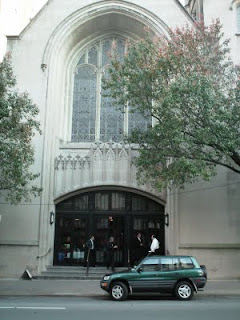 The Presbytery of New York City met today at Madison Avenue Presbyterian Church (photo right), one of its larger and more prestigious churches. According to the congregation’s history, however, the church that is now Madison Avenue Presbyterian Church was called "The church in the swamp" when it was established in 1834 near the Lower East Side shipyards. That history compels me to adapt a familiar adage for church leaders and suggest that when you are up to your ass in alligators it is hard to remember that your main objective was to establish and grow a church. And Madison Avenue has certainly grown since its founding in 1834.

Madison Avenue’s history notes that its 20th century started poorly. After another congregation had merged with Madison Avenue, the two congregations “did not meld well” and “members fell away until the merged church's rolls dropped below those of either of its constituents at the time of the union.”

The congregation’s history continues to report, however, that the situation and the church’s prospects “changed dramatically with the arrival of the young Dr. [Henry Sloane] Coffin, only five years out of the Union Theological Seminary (Some said that the church could not then afford a more established preacher).”

I wonder, if the congregation could have, at that time, afforded a more established preacher than Henry Sloane Coffin and had called him (it would have been a “him” in 1905), if the congregation’s history under that new established preacher would have been one as equally “of remarkable growth and transformation” as it was under Coffin. Sometimes safe and secure "establishment" bets end up being safe and secure, maintaining the establishment status quo, when what is needed for transformation and growth is risk taking, even the risk of the church losing its life as it undertakes it mission (G-3.0400 in the book of Order).

I am not suggesting or calling for careless risk, but rather churches and presbyteries (regional governing bodies) and even whole denominations taking the risk of trying new ideas, calling and empowering young and untested but visionary leaders, being willing to rock the establishment boat, and recognizing that it might be easier to move out of the swamp than trying to drain it.
Posted by John Edward Harris at 10:16 PM