Mr. Kennedy, I will serve you the Sacrament 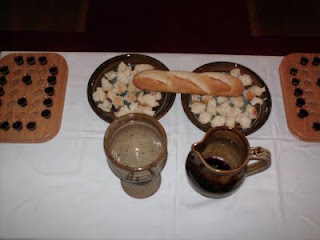 While the secular media recently seemed to focus some of its attention on the fact that the Roman Catholic Bishop of Rhode Island, Thomas Tobin, reportedly said that he asked U.S. Rep. Patrick Kennedy to stop receiving Communion, because of the congressman's public stance on moral issues, I have not seen much mention of the story in the religion and spirituality blogs I tend to read.

I would never consider asking someone, certainly not a member of the church, to not receive the Sacrament. As the Constitution of the Presbyterian Church (U.S.A.) states, “The invitation to the Lord's Supper is extended to all who have been baptized, remembering that access to the Table is not a right conferred upon the worthy, but a privilege given to the undeserving who come in faith, repentance, and love. In preparing to receive Christ in this Sacrament, the believer is to confess sin and brokenness, to seek reconciliation with God and neighbor, and to trust in Jesus Christ for cleansing and renewal. Even one who doubts or whose trust is wavering may come to the Table in order to be assured of God's love and grace in Christ Jesus." (W-2.4011a)

I think Patrick Kennedy meets the above criteria, and if he were to show up at North Church Queens the first Sunday of any month for 10:00 AM Worship, or any other time we are celebrating the Eucharist, I would serve him without question or reservation.
Posted by John Edward Harris at 10:09 AM

I'm recently back from Scottsdale,AZ after spending a week at the Fanciscan Retreat Center. The Roman Catholic Church at the Center invites all to celebrate the Sacrament of Holy Communion. There were 36 of us Presbyterians (Presbyterian CREDO Conference) there and we were all invited to take communicion. ~ Lloyd Johnson

I have found, and heard from others, that more rural Roman Catholics, especially in predominantly Protestant areas, are much more ecumenical then they are here in urban New York City.