Welcome to My Neighborhood: The Morning Walk (Part 1 - Forest Avenue) 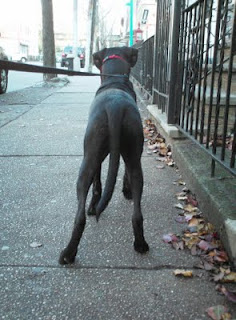 This morning, like most mornings, Myrrhlyn and I walk our 1.1 mile circuit around the neighborhood. The walk, and its route, is our morning routine, unless it is raining. It is not raining this morning. The sky is blue and the the air crisp. Since it is Saturday, the neighborhood is fairly quiet and just waking up.

Heading north on Forest Avenue (photo top right) we safely cross the first of fourteen street crossings on our route. Some of the crossings are controlled by traffic lights with pedestrian signals, but some are not. Our first crossing is not, so we carefully look for oncoming traffic.

Not long after our first crossing Myrrhlyn finds a discarded tissue (photo second right from top) . Yes, it is gross; but Myrrhlyn has a thing for discarded white tissues and paper towels. It seems I am always stooping over to force open his mouth to pull them out. Today is no exception.

Forest Avenue is one of two major north-south traffic arteries in Ridgewood, almost dividing Ridgewood between east and west. Forest is not a major commercial street but it is a bus route. I can hear the gentle rise and fall of the light traffic noise until the louder and deeper hum of an MTA bus approaches us from the south and eventually overtakes and passes us. I am always embarrassed when Myrrhlyn decides to do his business near a bus stop of waiting commuters or next to a stopped bus with passengers looking on. He does not embarrass me this morning. 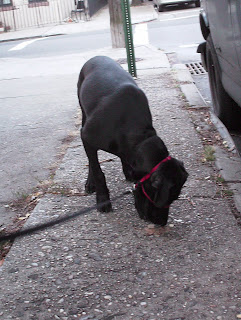 Myrrhlyn also has a thing for pigeons. If he sees any within five or ten feet ahead, as he does this morning, like a stalking wolf in the wild he slows his gate, slinks lower to the ground and tries to sneak up on them, lunging for them at the last possible moment. But he has never come close to actually catching one of these winged rats of the city so I am not too concerned about their safety or his.

During any given walk we sometimes encounter other dogs being walked by their owners. At times Myrrhlyn calmly ignores them. Once in awhile he gives them a passing glance and growl. Occasionally he barks up a frenzy, as if his world and very being is threatened. Today he is calm. Even when we cross the street in order to avoid a large dog and its owner who are approaching us he ignores them and does not make a murmur.

In addition to discarded tissues and pigeons my canine walking companion also has a thing for discarded food he finds on the street. I other words, my dog likes garbage, even chicken bones. As we near the end of the Myrtle Avenue segment of our walk, with the speed of light Myrrhlyn grabs something off the sidewalk and starts chewing it. By the time I open his cavernous mouth to remove what I discover is a small chicken bone, the bone is already near the back of his throat and I have to reach deep within to pull it out. I have lost count of how many such bones I have already pulled out of his chops these past few months. When will he learn? When will he stop?
Posted by John Edward Harris at 11:12 AM