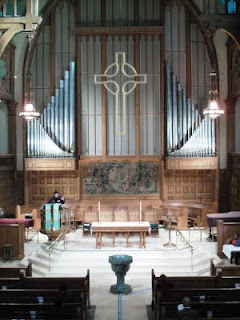 Yesterday’s meeting of New York City Presbytery at the Madison Avenue Presbyterian Church was architecturally dominated by a large Celtic cross suspended from the ceiling over the Chancel (photo top right). I do not know what it was made from. It appeared to be painted gold and was a simple outline, allowing me to see through it. Perhaps the ability to see through the cross is a metaphor. Rather than focusing our gaze on the cross Christians are called to look beyond the cross, allowing it to frame our vision of the world, acting as an interpretative lens.

On the back wall of the chancel of the church I serve as Designated Pastor, North Church Queens (a.k.a. North Presbyterian Church of Flushing), you can see another Celtic cross (photo bottom right). It was lovingly crafted from wood handpicked by the woodworking church member who made it, created in memory of a saint of the congregation.

Several years ago the Presbyterian Church (U.S.A.) Planning Calendar featured photographs of various stone Celtic Crosses from Ireland. I later saw most if not all of those crosses in person, including the one in Kells, the one time home of the famous illuminated manuscript known as the Book of Kells. 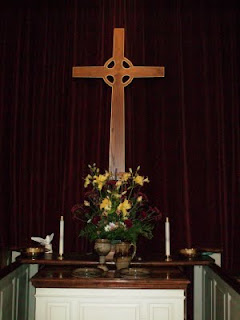 The origins of the Celtic cross are shrouded in Mystery. The form and shape of the cross seem to have undergone change and development over centuries. Some suggest the Celtic Cross has pre-Christian, pagan roots, and that Celtic Christians baptized a religious and spiritual symbol of the druids, the standing stone, and turned it into a cross. Know one knows for sure.

The Celtic Cross has long been associated with the Presbyterian Church, thanks in no small part to Presbyterian Scottish and Scots-Irish immigrants who immigrated to America. But during the years Cromwell ruled, dozens if not hundreds of stone Celtic Crosses in Scotland were thrown into the sea, lost forever. Isn’t it funny how what Presbyterians value and cherish today as part of our heritage was once considered an idol? I wonder what we might value in fifty or hundred years that today we think as anathema.
Posted by John Edward Harris at 11:42 PM