A Great Day in the Great South Bay 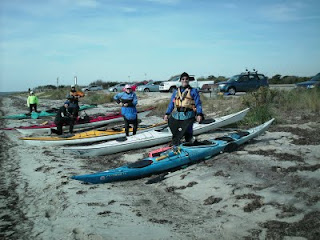 Members started arriving at the Sebago Canoe Club around 8:00 AM Saturday morning. Some came by car, some from as far away as New Jersey. Some came by Bus. They all came with the intention to paddle on perhaps the last trip away from Sebago for the season. In spite of remnants of the fall’s first frost still on the grass, the day promised to be clear and warm, which raised hopes for a great day of kayaking. By 9:00 AM five cars were loaded, and with boats on top, left Sebago, headed for Heckscher State Park.

Question: How many members of the Sebaog Canoe Club does it take to install Yakima racks on a Honda?
Answer: Seven. Three to do the work and four to watch!

After the fifty mile drive we all pulled into the parking lot at Heckscher State Park, just feet away from the north shore of The Great South Bay (photo top right). 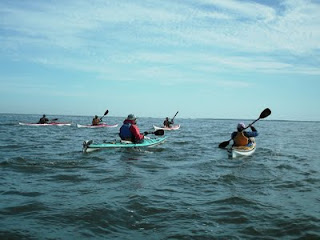 Between 10:30-10:45 AM all nine of us were on the water: Walter, Tony, John W., Phil, Peter, Elizabeth, Beth, Avi and me (second photo from top, right). I think I had paddled with everyone before bet never in the same group. Some I had not paddled with in months. The water temperature was around 48-50. At put in the air temperature was 52 but warmed up to 58 by later in the afternoon. Most of us were wearing dry suits but a few had donned wet suits.

For the first time in a long time I was able to paddle the club’s blue Necky Chatham 16, currently my favorite boat. It felt good to once again be sitting in its cockpit and to have a working skeg. It was also the first time this season that I wore my Dry Suit, which was much more comfortable than my wet suit, which I worn on the Columbus Day Paddle in Jamaica Bay. just a few weeks before. 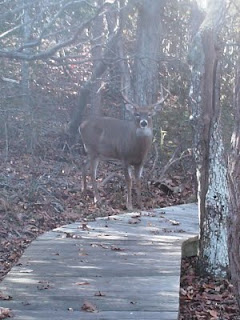 We beached on Fire Island, near the Sailors Heaven Visitors Center around 12:20 PM. Not a soul was in sight. With the picnic area to ourselves we enjoyed a true picnic lunch, people passing goodies around the picnic table. It seemed like Tony had an endless supply of homemade pop-corn. Walter produced a bag of Jo Joes. Nuts and fruits were also in abundance, and I am not just talking about the kayakers.

After refueling we tied up our kayaks against any rogue waves and followed the boardwalk into the Sunken Forest, where we were treated to a close encounter with a five point buck (third photo from top right). Near the center of the Sunken Forest I felt like a member of the Swiss Family Robinson, living in a large tree house on a deserted isle. Passing through the Sunken Forest we emerged on the southern shore of Fire Island and briefly visited the Atlantic Ocean before heading back to our boats.

Putting in from Fire Island around 2 PM we paddled back across the Great South Bay (fourth photo from top, right) from whence we had come. Wanting to paddle out ahead of the group so that I could take a few pictures with the sun at my back, I planted my paddle for the start of a power stroke only to have the paddle snap in my hands! Admittedly the paddle was not an expensive one and nearly nine years old, still, without a spare loaned me by Tony, I would have literally been up the Great South Bay without a paddle. I will write mor 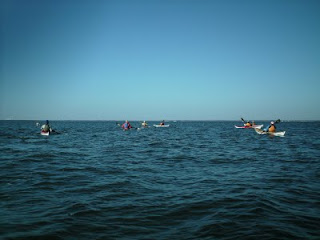 With wind and tide combining to provide one to foot waves for our enjoinment, the water was just a little more rougher for our return trip than it had been earlier in the day. Great discussion ensured as to whether the waves were one to two foot waves or foot and a half waves. Every once in a while it seemed like they were over two feet, but those were few and far between. Regardless of their height, the waves were rolling rather than choppy. Most spectacular, however, were some of the higher waves that occasionally appeared to glow a translucent aqua-marine as rays from the setting sun penetrated their crests.

By 4:00 PM we were back on the beach at Heckscher State Park, but not until after yours truly lost it in the surf while trying to ride a wave in. I think I had already peeled b 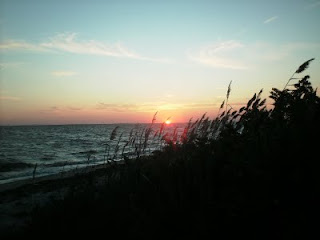 ack my spray skirt in anticipation of landing so as soon as my deck tilted below the surf the cockpit quickly flooded and before I knew I was no longer on the bay but in it. Yes, I am glad I was wearing a dry suit.

As we were changing and loading boats for the return drive we were treated to one of the most spectacular sunsets I have seen in a long time (bottom photo right). As the orange-red glowing disk set, however, we were also faced with falling temperatures, numbing fingers as we tied off our boats for the return drive back to Sebago. For the first fifteen minutes of the drive home the car heater was on full blast.

Back at the club we unloaded and stored boats and gear, said our goodbyes, and signed out.

By the end of the day and trip our hopes had been fulfilled. We had paddled across the Great South Bay to Fire Island, visited the Sunken Forest, and paddled back. The water was challenging but not threatening. The sun was warm, the air crisp, the water nippy, and the sky blue with barely a cloud. The companionship, as usual, was competent and collegial. It was indeed a great day on the Great South Bay.

More photos from the trip can be seen here.
Posted by John Edward Harris at 9:26 AM